First Person: Reflections on a D.C. summer of contrast 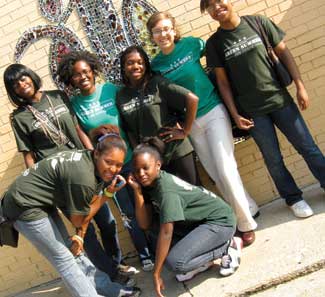 It may seem ironic that amidst all that Whitman offers — great academics, opportunities and good times galore — I spend a lot of time thinking about waste.

As a newly arrived first-year, I thought I was crazy for obsessing over efficiency. But only three years later, I feel downright mainstream alongside fellow Whitties eager to conserve resources and address climate change.

Along with turning off lights in empty classrooms, I’ve made it a habit to contribute all I can as a student to the growing movement for sustainability. While engaging in academic environmental studies, Semester in the West and community organizing, I have been able to explore and enact my vision for a “greener” and more peaceful world.

As senior year approached, however, I realized that I knew conspicuously little about environmental justice. So I accepted a summer job in Washington, D.C. — not in the halls of Congress but on the streets of the city. In one of the poorest parts of our country, I discovered a largely untapped wealth of resources to fight climate change: the renewable energy of youth.

In one of the poorest parts of our country, I discovered a largely untapped wealth of resources to fight climate change: the renewable energy of youth.

My official job title was team leader for the energy program of the mayor’s Green Summer Job Corps. The Green Jobs movement aims to build an equitable and environmentally sound economy that offers, as Van Jones puts it, “green pathways out of poverty.” The District of Columbia brings this dream to life through its nationally acclaimed Green Summer program. The program employs 800 low-income youths ages 14 to 21 in basic environmental work: restoring watersheds, caring for urban trees, revitalizing city parks and increasing residential energy efficiency.

I learned about the job last spring when I traveled with 15 other Whitties to D.C. for “Powershift,” the third annual summit of 12,000 young people demanding a clean, just and prosperous future from our elected officials. At “Powershift,” I ran into Juliana Williams ’07, who founded the Whitman Campus Climate Challenge I’ve helped lead. She recommended me as a Green Summer recruit, and I immediately accepted the offer.

For two humid months, I walked the streets of the city with a team of youth to benefit the planet and local citizens’ pocketbooks. The teens were armed with energy-efficient CFLs (compact fluorescent light bulbs) and, in their own words, the earnest desire to “change a lot of people’s minds about savin’ the world.”

Together we distributed hundreds of weatherization kits and manually installed 5,600 CFL light bulbs in nearly 600 homes. Over the five- to 10-year life span of these measures, we will have prevented tons of greenhouse gas emissions from further polluting air in that region and worsening global climate change.

Most importantly, the future looks brighter for those who need it most: our country’s most neglected youth. Through this project, teenage moms from drug-abuse pasts — like Shameka, a 19-year-old who may not get her GED but is now trained to install weather-stripping and expertly educate residents about mercury pollution — were gainfully and meaningfully employed. She is now poised to step up the lengthening ladder of “green” careers and proud for having helped her largely low-income community save a quarter million dollars on utility bills.

The pressures and dangers facing the kids I worked with shoved climate change into the background of my mind, something I thought impossible. I wondered: What can one person do to inspire a generation of marginalized urban youth to live “green” when they must first face negligent parents, political disenfranchisement and a host of inner-city hurdles?

In early June, Metro police undercover gang specialists advised us as supervisors about the lay of the city. With gold badges dangling over oversized football jerseys, they taught us how territorial “crews” and hierarchical gangs differ, the story behind shootings in the Trinidad neighborhood and how to lie low in infamous areas of Southeast D.C. Juxtaposed against my relatively sheltered past, such near-Hollywood drama repulsed and fascinated me. Through daily experience with Green Summer, I outgrew my blind stereotypes on urban life and racial issues, and took heart in the tangible steps we were taking together to improve the city.

I especially enjoyed teaching the Green Builders Council curriculum intended to prepare our employees for the job. Using teaching skills acquired through the Cool the Schools program I cofounded in Walla Walla,

I applied my Whitman education to explain environmental problems and brainstorm solutions with the teens.

The education chasms I discovered that week humbled me. Dozens of the youth in our program were high school graduates who didn’t know what molecules were. So, I used metaphors to explain climate change: “It’s the rate of change that’s scary, because getting used to a new situation all of a sudden is difficult.”

The pressures and dangers facing the kids I worked with shoved climate change into the background of my mind ...

What pertinent metaphor could I stretch to fit a phenomenon as abstract as global warming? “Think about it like having a baby when you’re still in high school,” I reasoned, eyeing one 15-year-old’s protruding belly. “It’s hard to manage everything when you have to grow up overnight, right? Plants, animals and people also have to adapt to a changed environment more quickly than they’re used to, and many won’t survive.” Judging by the millisecond of silence that followed — without sucking of teeth or rolling of eyes — my story may have struck a chord.

In all honesty, I’m not sure how many of my “teaching moments” resonated with my young helpers. For me, though, every attempt added spice to a strong brew of lessons on culture and leadership that I’m glad to have tasted.

The fact is that screwing in light bulbs is not glamorous, even if green is the new black. This program was successful thanks to the meticulous and dedicated work of my fellow college-aged supervisors and program managers. I believe it is urgent that my generation matches our high hopes for the future with a comparable work ethic to realize them.

My peers at Whitman already are. This fall Natalie Popovich ’10 led a project in our own backyard through the Campus Climate Challenge. In cooperation with local nonprofits and businesses, Whitman students began an effort to offset Walla Walla’s carbon emissions by distributing and installing thousands of CFLs in low-income neighborhoods.

To my mind, the time is ripe (and the stimulus funds are flowing) for us to shift American culture toward sustainability. In the words of a Green Summer kid, let’s hit the streets — together — so that we can “stay on this Earth a little longer.”

About the author:
Camila Thorndike is an environmental humanities major from Ashland, Ore.