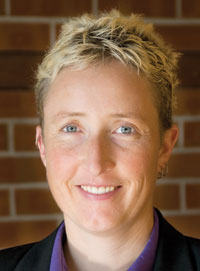 For 30 years, researchers had seen a pattern: More gay men than lesbian women attended traditional religious congregations. Melissa Wilcox, associate professor of religion and director of the gender studies program at Whitman, had studied this pattern in LGBT (lesbian, gay, bisexual and transgender) congregations but felt the wrong questions were being asked. “People repeatedly asked why the women weren’t coming and not, ‘what are they doing instead?’”

Wilcox endeavors to answer this question in her new book, “Queer Women and Religious Individualism,” released in August 2009 by Indiana University Press. The book chronicles the findings of an eight-year study of the spiritual practices of queer women that Wilcox undertook in Los Angeles. Although 28 of the 29 women in Wilcox’s study self-identified as spiritual, only 13 — less than half of the group — regularly attended any religious congregation, “even more alternative ones like Wicca or the Unitarian Universalist Church,” she says.

But what fascinated Wilcox was that these 13 women who did attend visited a total of 21 different congregations. Wilcox found that these women were going to multiple organizations, many of which were not religious in the traditional sense. “One woman was a very avid member of the Gay and Lesbian Sierrans — a part of the Sierra Club — and saw this as her spiritual activity,” Wilcox says. Other women listed New Age classes, billiards tournaments and work with the Sisters of Perpetual Indulgence — a LGBT charity — as part of their multifaceted religious involvement.

Although Wilcox has no statistical basis for generalizations with fewer than 30 participants, she strongly believes that her Los Angeles study is indicative of the spiritual lives of queer women nationwide. “I think these patterns for women leaving traditional religions will hold across the country because the reasons for their particular attendance patterns are reasons that hold across the country,” Wilcox says. 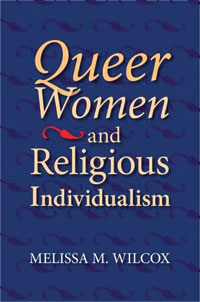 Wilcox traces the discrepancy between the spiritual activities of queer men and women to several sources, including the differences in the development of their religious and sexual identities. Many teenagers, regardless of gender, disaffiliate with their childhood religions. However, because men come out at around 16, they are “negotiating their sexual identity in the context of their childhood religions,” says Wilcox. Women, who tend to come out later, at 19, will already have left their old faith behind and will be reckoning with their sexual identity “in the absence of religious influences.”

As a consequence, other influences –— including a commitment to feminism and LGBT rights, and the gender of the congregation’s leader — will have a greater bearing on their choice of congregation, and frequently lead them away from traditional options.

Furthermore, the contemporary structure of U.S. religion is conducive to these women finding a more nonconventional niche. There is a national pattern of religious individualism, Wilcox says, that is, “a tendency for people to negotiate within their religion, regardless of its dogma.” She hypothesizes that these patterns will break down only in rural areas, where the dearth of resources would prevent women from associating with alternative groups.

Wilcox hopes to do more than theorize about the larger implications of her research. “I would really love to either do or see someone do a national study on the connections between sexual identity and religion,” she says.