How high is that waterfall?

Courtney Porter ’10 and Clare Tochilin ’10 at the lookout point across the plunge pool from the falls. Photos courtesy of The Spokesman-Review. 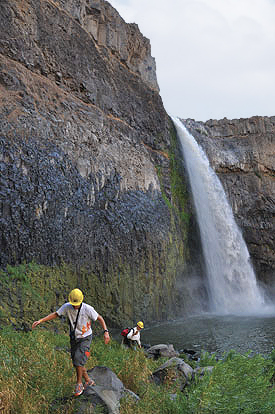 By Clare Tochilin ’10 and Courtney Porter ’10

On Aug. 18, 2009, at 5 a.m., six bleary-eyed Whitman geology majors (Elise Otto ’11, Curtis Reid ’10, Katie Rouse ’10, Sarah Wolf ’11 and ourselves), along with Bob Carson, professor of geology and environmental studies, piled into a van and set off to Palouse Falls — a waterfall on the Palouse River near its confluence with the Snake River in eastern Washington, about 90 minutes from campus.

Our mission: to measure the exact height of the falls. This height has been estimated at somewhere between 175 and 200 feet but has never been definitively determined.

We became involved when Rich Landers, a journalist for The Spokesman-Review, approached our professor to propose a precise survey to get an official height measurement. Carson regularly leads field trips to Palouse Falls and other geologically significant areas around eastern Washington. Having taken his geomorphology class, we had participated in many of these field trips and studied the geology of Palouse Falls and the surrounding area. We were interested in Landers’ idea and eager to be a part of this project.

Before we could begin measuring the falls, we discussed the factors that could potentially cause inaccuracy in our measurements. We first needed to decide what actually is the top of the falls. This was difficult because the waterfall slopes more gently for the first few feet before becoming vertical. We considered the top of the falls to be the surface of the upper pool above the gently sloping portion and the bottom to be the surface of the plunge pool.

Once we had devised a plan and assigned tasks to each member of the group, we split into three teams and took our positions around the falls. Three group members hiked around to the top of the falls, where they used climbing gear to anchor themselves to the rocks so that they could safely approach the edge of the cliff. From there, they lowered a milk jug — rather low-tech, but effective — filled with water on the end of a no-stretch, fiberglass tape measure down to the plunge pool.

It was exciting to be a part of the group that first measured the exact height of such an impressive waterfall.

Carson, Landers and another student made their way from the top of the falls down to the shore of the plunge pool with an altimeter to take elevation readings. These were later compared with the other measurements as a gauge of their accuracy.

The two of us remained at the lookout point across the plunge pool from the falls (at left) with a telescope and a level to determine when the milk jug was even with the top of the falls and when it reached the surface of the plunge pool.

We also took readings with a clinometer — an optical device — to measure the angles between our location and the top and bottom of the falls. This information was later used in trigonometric calculations to come up with our final answer. The three teams were in constant communication using radios, and we recorded all the measurements taken by the other teams from our station at the lookout point.

Through a series of calculations, we determined the height of the falls to be 175 to 180 feet from pool to pool. However, because of seasonal differences in the discharge of the Palouse River, this measurement may vary throughout the year by approximately 5 feet.

When we were at the falls in late August, the discharge of the Palouse River was low. When Bradt kayaked over the falls in April, there was much more water flowing over the falls, so the pool-to-pool distance may have been different. Future field trips during different times of year will give us a better idea of how much the vertical distance actually does vary.

Web Extra: See video of the researchers in action at the Spokesman-Review.

Our work was done sooner than we had expected, so we all met at the top of the falls to cool off and enjoy a refreshing dip in the upper pool. Overall, this field trip, like all of the geology trips we have gone on with Bob Carson, was successful and exciting. No matter where Bob takes us on these excursions, we are always inspired by his passion for working in the field, and we come away with an enriched knowledge of the geology of these places.

Our experience at Palouse Falls was no exception. It was exciting to be a part of the group that first measured the exact height of such an impressive waterfall, and we believe that our determined height of 175 to 180 feet is accurate to within a few inches. With or without those inches, Bradt’s plunge over the falls was remarkable, and it inspired an excellent and educational field trip opportunity.

Clare Tochilin, a geology-environmental studies major from Atlanta, Ga., plays the violin with the Whitman and Walla Walla symphonies and chamber music groups.

Courtney Porter, a geology-chemistry major from Redmond, Wash., is captain of the women’s soccer team and a member of Delta Gamma sorority.