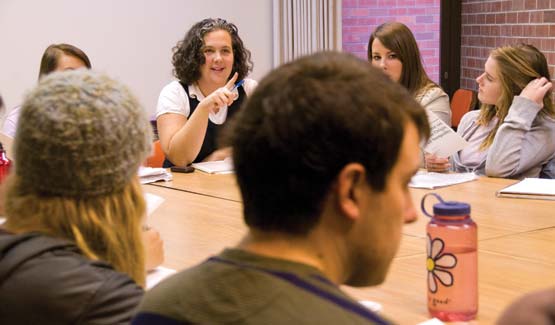 Claire Valente, adjunct assistant professor of general studies, and her “Encounters” class discuss Jean- Jacques Rousseau’s “Discourse on the Origin of Inequality,” a work that carried over from the “Core” syllabus.

Whitman’s Class of 2013 embarked on the same journey this fall as many classes before them — a two-semester foundational course that requires them to mentally grind and polish their way to a new level of critical reading and analysis and writing skills. To do so, they explore some of the world’s most celebrated and complex literature.

Make that literature, film and other works.

The course formerly known as “Antiquity and Modernity” — often referred to as “Core” — is now “Encounters.” With the new name comes new genres and added depth in the syllabus. While in past years the course focused on classics and contemporary works of Western civilization, the 2009-10 program includes classics from other worldviews. New texts and materials include “The Bhagavad Gita, “The Qur’an,” Gandhi’s “Selected Political Writings” as well as Martin Luther King Jr.’s “Letter from Birmingham Jail” and the first film on the syllabus, Charlie Chaplin’s “City Lights.” 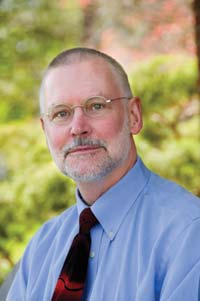 This is the second major transformation of the seminar since it began in the early 1980s, said Timothy Kaufman-Osborn, provost and dean of the faculty. The newest version, which faculty members started rebuilding in 2007, responds to faculty having “raised very good questions” about whether the focus on Western worldviews “was entirely consistent with the college’s commitment to its core value of diversity,” he said.

Faculty then began meeting to develop a comprehensive syllabus that included non-Western texts. “We all have our favorite texts,” he said. The faculty, trained in different disciplines, had “to argue this out until they came to agreement” about which texts would be included. They eventually crafted three plans that were put to a vote. It’s a real tribute to the faculty that they put the time and energy into the process, he said.

The updated course, which spans the sciences, social sciences and the humanities, is organized around a variable theme, said Rebecca Hanrahan, associate professor of philosophy and director of “Encounters.”

The course’s broad theme is the examination of encounters between people and cultures, and the formation and transformation of dominant and competing worldviews. Throughout the course, “the non-Western meets Western, male meets female, ancient meets modern, truth meets doubt,” Hanrahan said.

As it was with “Core,” writing is a key item on the “Encounters” agenda. “‘Encounters’ is our writing ‘boot camp’ for our first-year students,” Hanrahan said. “It’s the only required writing course at Whitman, and it is where students gain the basic skills so that they can begin the process of learning how to write at the college level.”

“Whitman is a place of academic goodwill. Professors and students alike come to the table wanting to learn, wanting to not just answer the question at hand but also to find better questions to ask. We are interested in undermining our own prejudices, and ‘Encounters’ helps to launch that very valuable process.”
— Rebecca Hanrahan
associate professor of philosophy and director of “Encounters”

Hannah Lewis ’12 remembers having initial reservations about the course during her first year.

“As the year progressed my professor definitely pushed my comfort zone to improve my writing and thinking skills. Success in ‘Core’ required in-depth analysis of literature that went beyond the obvious. The most important lesson for me was that I would excel more by writing about something that I was actually interested in than I would by regurgitating my professor’s interests. This was a scary leap to take, but I am glad that I took it, and I now feel more confident in my ability to formulate ideas.

“As a successful high school graduate, it was easy for me to enter college believing that my thinking and writing skills were sufficient

to get me through Whitman. The first-year program was a wake-up call to the standard expected at Whitman, and I’m thankful that I got it early on,” she said.

Kaufman-Osborn said the first-year course gives students an “introduction to what is expected of them at this liberal arts college.

“Much of the course is aimed at teaching students the basic intellectual skills they are going to have to put to work in the rest of their educational experience at Whitman,” he said.

“It aims to teach students how to think well, how to write well, how to speak well, how to construct an imaginative and logistically persuasive argument — and those are intellectual skills that they are going to require in every course they take at Whitman.”

In addition to gaining writing and general intellectual skills, there is the opportunity to explore, understand and soak in the beauty and depth of about 25 of humanity’s most renowned works.

Mitch Clearfield, visiting instructor of philosophy and general studies, is one of about 30 faculty members who teaches “Encounters.” Although he liked “Core,” he sees advantages to the new syllabus.

“One of the primary benefits of the change is expanding the material that the course can draw on, opening up the world beyond the ‘West,’” he said. “I think it’s also helpful that we moved from a strict chronological order to one that’s roughly organized by theme. That will help students more easily draw connections across texts and see their complex interrelations.” 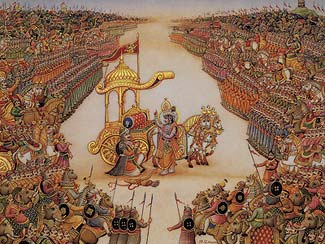 Works added to the first-year course range from “The Bhagavad Gita” to Martin Luther King Jr.’s “Letter from Birmingham Jail,” and the first film included on the syllabus, the circa-1930s silent classic “City Lights" (below).

Kaufman-Osborn, who taught the demanding course for years, said it is a discussion-based class, and students are “expected to do the reading, to do it well and come to class prepared to discuss.” And that means prepared to cite evidence from the text, construct an argument, exchange opinions and articulate “what they find noteworthy and what they think is not entirely adequate about their peers’ views.”

Hanrahan, who earned a doctorate in philosophy from the University of North Carolina, Chapel Hill, believes that “Whitman is a place of academic goodwill. Professors and students alike come to the table wanting to learn, wanting to not just answer the question at hand but also to find better questions to ask.

“We are interested in undermining our own prejudices, and ‘Encounters’ helps to launch that very valuable process,” she said. 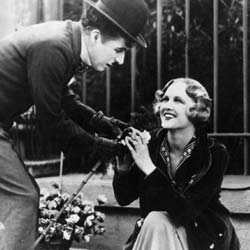 The syllabus for the new “Encounters” class involves more than abandoning Eurocentrism with the addition of non-Western texts. An entirely new genre has been put on the plates of first-year students: film.

“How can we ask the same questions of film, the dominant cultural production of the contemporary West, as we do of literature and philosophy?” asked Claire Valente, adjunct assistant professor of general studies.

Her “Encounters” class took that particular problem head-on with a fast-paced discussion of Charlie Chaplin’s silent film “City Lights.” The film’s technical and thematic elements, as well as the personal, philosophical, social and methodological ramifications of the 1931 comedy/romance were actively explored.

The discussion, however, was not isolated to “City Lights” but also drew upon works the students had already read: the “Bhagavad Gita,” Homer’s “Odyssey” and selections from Sappho, an ancient Greek female poet. Specifically, a contrast and comparison of issues such as attitudes toward rank, class and social mobility were brought to the table.

“Our discussions made me aware that I needed to look at miniscule details to form a more cohesive outlook on the film,” said Stanislav Walmer ’13, one of Valente’s students. “‘City Lights’ was a good mental exercise for connecting many works together thematically.” Walmer said that through his participation in class discussion about the movie, he was able to understand many things that he wouldn’t have otherwise.

“Our discussion also helped me ponder why it was so funny. Overall, I thought it was hysterical, and I was quite pleased that silent film humor is pretty universal and can make any person laugh,” he said.

Web Extra: To learn more about what first-years are studying, see links to texts, audio recordings and resources at the General Studies Web site.

“Both the ‘Bhagavad Gita’ and ‘City Lights’ so far have absolutely fulfilled expectations,” Valente said of the new genres and works added to the syllabus. “I could have easily used at least another day on each of them, and the students would still be talking.”