Between Heaven and Earth 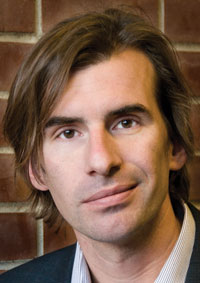 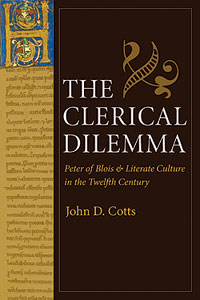 “Where do you fit in this world, between heaven and earth? How do you reconcile the competing obligations?”

Such were the potent questions that John D. Cotts, associate professor of history, formulated as he studied the letters of a 12th century French cleric. The culmination of 13 years of meticulous research was a 336-page book, titled “The Clerical Dilemma: Peter of Blois and Literate Culture in the Twelfth Century,” released in September 2009 by the Catholic University of America Press.

Cotts’ work is the first book-length study of the life and writings of this notable 12th century intellectual.

“This work will thoroughly revise the way scholars view Peter of Blois and thereby provide important contributions to our understanding of the 12th century Renaissance,” said Hugh Thomas, a professor of history at the University of Miami.

Peter’s 12th century letter collection was one of the largest and most widely circulated collections of the 13th to 15th centuries. “It was a series of correspondence that he wrote to people like himself,” namely, high-ranking educated intellectuals among the clergy or royalty in Western Europe, Cotts said.

“The title of the book refers to the spiritual and professional crises that educated intellectuals had to deal with in the Middle Ages.

“What I tried to do through this letter collection was to create a cross-section of the intellectual elite of 12th century Europe,” Cotts said.

Peter’s collection achieved particular popularity among these intellectuals because “he was uniquely sensitive to the issues that were brought up by the development of literate culture.”

These issues were complex spiritual quandaries: “What is the correct use of learning for a Christian? Is it appropriate to use it to make money by studying the law? Is it proper for a Christian cleric to work in a secular administration as opposed to an ecclesiastical one?”

It was a dilemma, apparently, that Peter never entirely resolved, continuously revising his letters throughout his life. But when his letter collection was first edited and published in the 19th century, it “obscured the fact that Peter had revised his letters,” Cotts said.

To delve into the full range of Peter’s opinions, Cotts traveled to Europe six times over a 10-year period to read some of the 300 original handwritten manuscripts. Cotts found the variability in Peter’s work fascinating.

“In addition to what it reveals about literate culture at the time, it also shows us how texts are created, thought about, revised and circulated,” Cotts said.

Cotts is vice president of the North America chapter of the Charles Homer Haskins Society, an international scholarly organization.