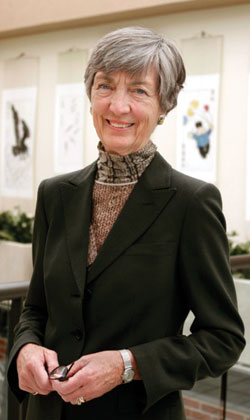 “Colleen Willoughby’s life work reflects the very spirit of volunteerism exemplified by New Yorker Mary Harriman, the founder of the very first Junior League,” said Debbie Brown Robinson, association president. “Her passionate leadership and commitment to meeting community needs are reflections of the foundation on which the Junior League movement was built.”

Past recipients of the annual award include Sandra Day O’Connor, a former U.S. Supreme Court justice.

Willoughby, a political science and speech major at Whitman, was a junior high school teacher for a few years. Then while raising a family, she became increasingly involved in volunteerism as a Junior League member.

In 1980, Willoughby founded the CityClub in Seattle out of concern that women had limited access to civic discourse since most civic organizations at the time were open only to men. CityClub continues to provide a nonpartisan forum that has brought in such well-known names as Warren Buffet.

More than 20 years ago, Willoughby established the Whitman “Women in Leadership Symposium” to bring women to campus to share their life stories as inspiration to generations of Whitman students and alumni. Each year, she serves as symposium moderator. “Leadership is not defined by the length of your resume, but by your ability to draw others to your work,” Willoughby said as she introduced the symposium’s panel of speakers in 2007.

Willoughby also founded the Washington Women’s Foundation to create a new fund of major money from women donors, and to train donors to become effective philanthropists. During the past 13 years, the foundation has granted nearly $9 million to more than 860 nonprofit organizations.

She said recently that her involvement in Junior League has enabled her to meet people she wouldn’t have met otherwise and has enriched her life “beyond measurement.” She said it’s “very humbling to feel your career has been selected to receive that award.”