“All my plans require time and distance” — Dr. Marcus Whitman

When in 1977, then-Colorado-based Melinda Jones ’70 wrote to 40 years of Whitman English majors asking for their “Howellisms” from past notes, she could not have guessed that it would take more than 30 years for a publication featuring Tom Howells’ wit to come to fruition and that it would happen in Kentucky (where I live). Some things really do require time and distance.

Thomas D. Howells — Tommy to many — taught English at Whitman College from 1938 to 1977 and was an adjunct professor from 1981 to 1987. He also lectured for the Alumni College (now Summer College). When Jones heard about Howells’ pending retirement, she wished to provide him with a tribute by publishing a collection of his famous classroom bon mots — or, as he would come to describe them, his obiter dicta — which so many students jotted down in the margins of their notes.

At Howells’ memorial service in 1991, longtime religion professor Dr. George Ball featured these moments saying, “Most of us have attended some of Tom Howells’ lectures, and we remember being thrilled by that precious moment when he would pull out of his pocket or briefcase that little black book. We knew that we were about to be calmed, enlightened and enlarged by the gentle irony with which he viewed humanity without condemning it.”

Ball went on to share several excerpts from the last of Howells’ little black books: “Literature is a way of studying the world without leaving home,” and “If it (the universe) is the product of design, the Designer will have to announce His presence and His function. Such a truth in the form of fact is probably too large for the human mind to fathom, although human feeling found its answer long ago and, as I understand, still finds it.” 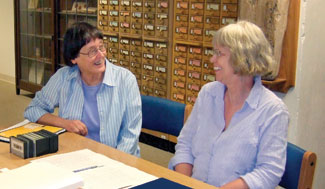 As Nancy Priest Valaas ’68, left, and Ruth Spangler ’71 pored over the Thomas Howells collection in the Whitman College and Northwest Archives, they enjoyed sharing memories of their days in his classes and on campus.

Meanwhile, I had waited for the publication of the obiter dicta and had more or less given up wondering if it was going to develop. It turned out that Jones had collected and prodded valiantly but the publication did not make it to print, perhaps because Howells did not really retire as planned. In the spring of 2008, I asked my husband, Jack Ashworth ’71, if he still had the two typescripts of talks Howells gave in the fall of 1977 and the spring of 1978, long ago sent to us by our friend and astronomy professor Kate Bracher. On rereading the papers, I e-mailed the Whitman College Archives to be certain that these two papers were safely collected there. The answer promptly came back: Yes, those papers are here, and other Howells material is here as well.

“Other Howells’ material” was an enticement so delicious that I could not resist checking what might be included. I contacted my friend Nancy Priest Valaas ’68 in Seattle to inquire whether she would be interested in making a Walla Walla pilgrimage to examine the collection. My sister Jill Spangler Emigh ’74, a Walla Walla resident, quickly agreed to shelter us for a week of archival activity in the summer of 2008. To Nancy’s and my delight, a rich trove of papers and written material as well as taped lectures emerged.

“‘Other Howells’ material’ was an enticement so delicious that I could not resist checking what might be included ...”

After studying the papers, lectures, poems and novels, the idea of leaving that material hidden away in the dusty boxes of the archives didn’t seem the best use of Howells’ wisdom and wit. We puzzled over what form would fit his material to both announce the presence of his papers and appeal to a broad range of people. It took some time to realize a collection of Howells’ obiter dicta might be just the right beginning point.

Although it was apparent early on that handwritten pages from Howells’ little black notebooks did not make it to the archives, the collection Jones made in 1977 was there. Supplemented by other material, as well as selections from our college notes — still treasured though now essentially ancient — it would reflect something about the man, his genius as a teacher, which could be partially — and quickly — captured and shared.

Web Extra: The Whitman College and Northwest Archives includes many digital collections of historical documents and photos. A finding aid for the Thomas D. Howells Papers in the archives can be found here.

The delight and depth of Howells’ other writing could be left for more prolonged study and development as suitable editors find themselves attracted to the material. In the meantime, former students can once again enjoy the richness of his keen wit in the forthcoming publication “Friends, When in Doubt — Read More: The Collected Obiter Dicta of Thomas D. Howells.”

Thomas Howells was named Mary A. Denny professor of English in 1976. Ruth Spangler ’71 lives in Louisville, Ky. Watch Whitman Magazine for more details about the publication when it becomes available.