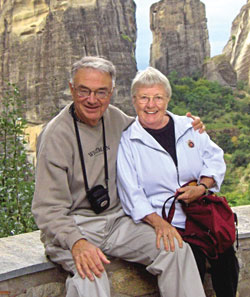 The Whitman family lost a cherished and devoted member with the Nov. 15, 2009, passing of Overseer Emerita Cora Dee Hunt ’55, following a valiant battle with cancer.

Cora Dee was a warm, caring, energetic and wonderful human being, but also known as a real “go-getter.” She received the 1986 Gordon Scribner Award, given by the Alumni Association to individuals who have made a major contribution of volunteer time and effort to Whitman and possess the ability to inspire.

She served as an overseer from 1979 to 1994 before accepting emerita status. She served on the Alumni Board from 1973 to 1979. In 1977 she became the first woman elected as alumni board president. Cora Dee and her husband, Hal Hunt ’55, served as co-chairs of their 50th reunion. Cora Dee also advised Delta Gamma members.

“Cora Dee’s leadership and commitment to the college and its values and mission made her an invaluable advocate and adviser to many of us at Whitman,” said John Bogley ’85, vice president for development and college relations.

Music was central in her life. A talented pianist, she earned her degree in music and later immersed herself in Whitman’s music program as a patron, supporter and friend of the faculty. Not only did she and Hal make financial gifts, she also raised funds for a Steinway piano, gave the department a harpsichord and provided a venue for scholarship auditions in Seattle.

About her, Lee Thompson, professor of music, said: “Cora Dee was an energetic, wonderfully happy force. She was an ardent supporter of our music program in many ways for many years. She gave so much back to Whitman, and she will be greatly missed. I feel extraordinarily fortunate to have called her a friend.”