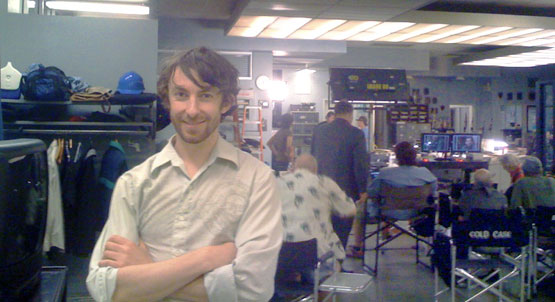 “I made hundreds and hundreds of cold calls trying to get my scripts read,” said Jerome Schwartz ’03. Now a script he wrote for an episode of the popular CBS police drama “Cold Case” is set to air Dec. 6.

Schwartz, a staff researcher for the TV show, graduated from Whitman with a double major in theatre and English literature. He ran his own production company in Portland, Ore., and traveled for a time before making the move to Los Angeles in 2007.

Eventually he landed a job at the Writers Guild. As an aspiring writer, he suddenly found himself struggling in the middle of a writers’ strike.

One would think his timing couldn’t have been worse.

“Surprisingly, it worked out great. I was able to associate daily with some really amazing writers who wouldn’t normally have given me the time of day.”

Once the strike ended, the contacts Schwartz had made earlier while loading vans and getting coffee turned out to be useful. He got a job with the Emmy Award-winning NBC sitcom “The Office” as an assistant running errands and doing clerical tasks.

“My girlfriend passed my résumé along at ‘Cold Case,’ where they were looking for a writers’ P.A.,” he said. “I jumped at the chance. At first it was a process of putting in hours and hours of work — first making coffee and making copies. I had to learn to write in little bursts, between job responsibilities.”

Writing on the side turned out to be a good way to get the writers’ attention. “I made clear that I was hungry to take the next step,” Schwartz said. He’d slip his work onto their desks and ask what they thought. Soon he was promoted from “the coffee guy” to “researcher” for the show’s writing staff. His new position, however, got him more than just script-writing opportunities.

“The coolest thing about the job is the level of involvement in production. Not only do I get to write the script, I get input on all levels of production: hair, makeup, props, locations, costumes, etc.”

While at Whitman, Schwartz won three one-act-play contests, wrote and produced a feature film, got to see a full-length play he wrote performed, played intramural sports, acted, led Scrambles outings and spoke at his 2003 Commencement.

His willingness to go the extra mile in his academic and professional career was a key quality that his friends and colleagues associate with Schwartz’s overall success.

Schwartz came to Whitman with all that talent, said Craig Gunsul, a professor Schwartz worked with frequently. “We just continued to let him grow.”