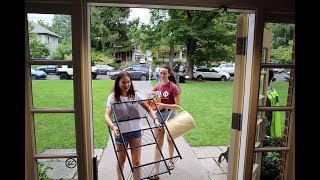 More than 400 new students and their families arrived on Whitman's campus this week, including the college's largest contingents of international students, first-generation and working-class students, and students of color.

"This class is historic in many ways," said Kazi Joshua, vice president for student affairs and dean of students. "The class has twice the number of international students who enrolled over last year. Numerically, this has not happened before in the 134-year history of the college!"

More than one in 10 of Whitman's Class of 2023 is comprised by international students. Countries represented span the globe and alphabet - from Albania and Burundi, to Zambia and Zimbabwe, with China, Ecuador, Kenya, Mongolia and Pakistan also mixed in.

First-year student Sothea Teng '23 hails from the Puok District in Siem Reap Province, Cambodia. Teng spent the past two years at the United World Colleges (UWC) Changshu China before transferring to Whitman College. After hearing that some fellow UWC students had applied to Whitman, he followed their lead and also received encouragement from his college counselor.

"As soon as I looked at the website and the YouTube videos, I fell in love and applied to Whitman. I'm so happy to be here, it's awesome," said Teng, who is considering majoring in economics and minoring in Chinese.

Attending school at Whitman will be Teng's first experience in the United States.

"It's beautiful here, so very green, not too rural or suburban," Teng said. "It reminds me a lot of where I come from: a small community, very closely connected, and people are so nice. I felt very welcome as soon as I arrived on campus."

Whitman's commitment over the past several years to enhancing diversity, equity and inclusion is coming to fruition in other ways. The incoming class set new records for the highest percentage of first-years who identify as a student of color.

"When I first heard the name of the city I said, ‘Is that for real? Walla Walla?' It's a far stretch from Dallas, but I Googled ‘best schools for jazz studies' and Whitman was No. 7 on the list, and Whitman gave me the most incentives to be here," said Scott, who plays trumpet, bass and guitar. "The look of the campus is just beautiful, and the climate is much better than Dallas."

Coming from much closer is Seattleite Sirat Dhot '23, who moved into her first-year residence in Prentiss Hall.

"It is such a pretty campus, but the main reason I came here is because I want to do pre-med. The BBMB (biochemistry, biophysics and molecular biology) program is what attracted me," Dhot said.

"And Seattle is not very far away," chimed in her mother, Aman, who assisted her daughter with the move-in. "Seattle is just a 45-minute plane ride away."

This year's incoming class also welcomed the largest number of first-generation and working-class students. More than 70 students will be the first in their family to attend college, representing nearly 14% of the incoming class.

"The Summer Fly-In Program nearly doubled its attendance as compared to the year I participated," said Isaiah Banta '20, president of the Associated Students of Whitman College (ASWC) and himself a first-generation and working-class student. Whitman's Summer Fly-In Program brings first-generation and working-class students to campus the week before classes start so they can get acclimated to college life.

"I'm proud to be a part of the senior class who will be welcoming these new students to our campus and telling them, ‘This is your home too,' in not just words but actions. It's going to be a great year," Banta said.

Joshua, who was born in the Republic of Malawi in southeast Africa, said the increase in overall diversity among the incoming class reflects the changing nature of the academic community and world at-large.

"This change invites us, the whole community, to think more broadly about sense of belonging, thriving and flourishing," Joshua said. "As an international student myself, it brings me back to my earliest memories of being a student on an American college campus, the things that were strange and that I did not understand, and more importantly, the people who assisted me along the way. I am certain that Whitman will become a more transformed place as our campus becomes more global. We are, in some ways, beginning to reflect the world. This is exciting."

The college will mark the start of the new academic year with Convocation at 4:30 p.m. Friday, Aug. 30, 2019, in Cordiner Hall. This year's speech is by Albert Schueller, the Mina Schwabacher Professor of Mathematics. Classes resume on Tuesday, Sept. 3.