Whitman College students, faculty and staff members, and Walla Walla residents had the rare opportunity to see justice in action Sept. 10-11, 2018, when Washington's highest-ranking judges visited the campus for two days of candid discussion and education about the legal process.

Each year the Washington State Supreme Court justices travel to three colleges or universities. These visits not only allow them to show the human side of the law, but also learn what issues are important to students and the local community.

Justices Steven E. González and Susan J. Owens organized the visit to Whitman, which was instigated by a student.

"We were here for a conference about a year and a half ago. As part of that conference we had discussions with students here who were interested in legal careers," González said. "We talked in part about the travelling court, and one of the students asked, ‘When are you coming to Walla Walla?'"

An official invitation from President Kathleen Murray to bring the court to Whitman followed soon after.

Seven of the court's nine justices attended classes on Monday, sharing experiences from their personal and professional lives. They also gave students invaluable insight into the character it takes to pass judgment on some of the most important issues facing the United States today.

Chief Justice Mary E. Fairhurst, who was elected to the bench in 2002 and has led the court since 2016, attended "History and Theory in Anthropology" taught by associate professor and anthropology department Chair Suzanne Morrissey.

Student Merideth Zeigler '21 asked Fairhurst if she has faced gender discrimination during her career.

"I grew up thinking I could do anything I wanted to," Fairhurst said. "But some people seemed to think I should be a paralegal, not an attorney; that I should get coffee, not take a deposition."

"We talked about implicit bias in the criminal justice system and how images can affect how we judge people, because they're studying that very thing through Islamic films," González said. "I talked about some things I've done in my career that relate to the issue of bias in the justice system, such as hate crime prosecution and jury selection. It was a fascinating discussion and I'm so glad to have been a part of it."

"For me, Whitman is special," Yu said. "It's not going to be like any other visit, and part of it is having come here in 2016 to be the commencement speaker and receiving an honorary degree. This makes it a very personal connection - and I have great admiration for President Murray." After classes, Professor Paul Apostolidis moderated the panel "State Courts, the Federal Judiciary, and the Rule of Law." The panel gave students, employees and community members an inside look at the court system, and the responsibility the judges feel for it.

"I've been a judge for 18 years, but I'm aware of the gravity of every decision," Yu said. "It's something I take very seriously, and I'd describe it as a heavy burden in many ways."

"Our decisions impact every person in the state of Washington," Fairhurst said. "So, we wear that responsibly heavily."

Other topics discussed on the panel included the process by which judges are elected and/or appointed to the bench, the nationalization of politics and the importance of resolving disputes peacefully.

"I really hope students see that the justices are definitely keeping alive in the sphere of court deliberations the possibility of democratic discussion and negotiation on a rational level about key problems that the public faces in this time of great change," Apostolidis said.

"Listening to the judges talk, they made the judicial process seem a lot more human," said student Matthew Dahlstrom '21. "We only see national coverage of what's going on and it's really polarizing, these clashes between political ideologies, but when they talked about what we can do at the local level, it made it seem not so bad."

On the second day of their stay on campus the justices held court in Cordiner Hall, where they heard oral arguments on two current cases:

"We were delighted to have the opportunity to host the justices here on our campus as they deliberated these cases," Murray said. "Their visit provided an impactful way for Whitman students as well as the larger community to observe the judicial system in action." 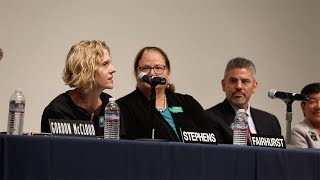