Abigael Carron ’23 and Sarah Hoffman ’23 are no strangers to the particularities and fun of ski racing. Both first-year students at Whitman had skis under their feet before the age of 3. Yet it wasn’t until they joined the Whitman Club Alpine Skiing Team that they discovered just how incredible, supportive — and fun — skiing can be.

“I started skiing when I was about 2. My mom used to race and so I kind of got into that at a young age, and so it is just kind of something that I have been doing my whole entire life, and my mom was actually my coach for most of my life,” said Hoffman, who grew up in Hopkins, Minnesota.

The speedy skiers were very successful in their races this season: Carron won the race Feb. 1, 2020, and Hoffman won Feb. 2 at the United States Collegiate Ski and Snowboard Association’s White Pass ski race. As a team, Whitman placed first on Sunday and third on Saturday.

The team competes as part of the Northwest Collegiate Ski Conference. The White Pass race was the third of four Alpine Qualifier races for athletes to qualify to the Western Region Championship in Boise, Idaho, and the USCSA National Championship in Lake Placid, New York. At the Western Region Championship, the Whitman women’s team placed fourth of the 17 teams. This qualified the skiers to the national championship in March. Hoffman attended the championships with the team and was able to compete in slalom and giant slalom, unfortunately the final day of racing was canceled due to COVID-19 concerns.

Hoffman and Carron cite the supportive and positive team atmosphere as a big contributor to their individual successes at these races. At the late February race at Mount Hood, Carron placed second on day one and led the team to a second-place finish overall, despite wild weather on the mountain. The skiers endured rainy, wet and icy conditions, yet the team kept spirits high and there were many exciting outcomes for the racing day.

“What really stands out to me about that race though was how the whole team was still there cheering on everybody no matter how disgusting it was outside,” Carron said. “They kept the hype levels up so high for everybody and everyone was so excited and that just really fostered our team environment.” 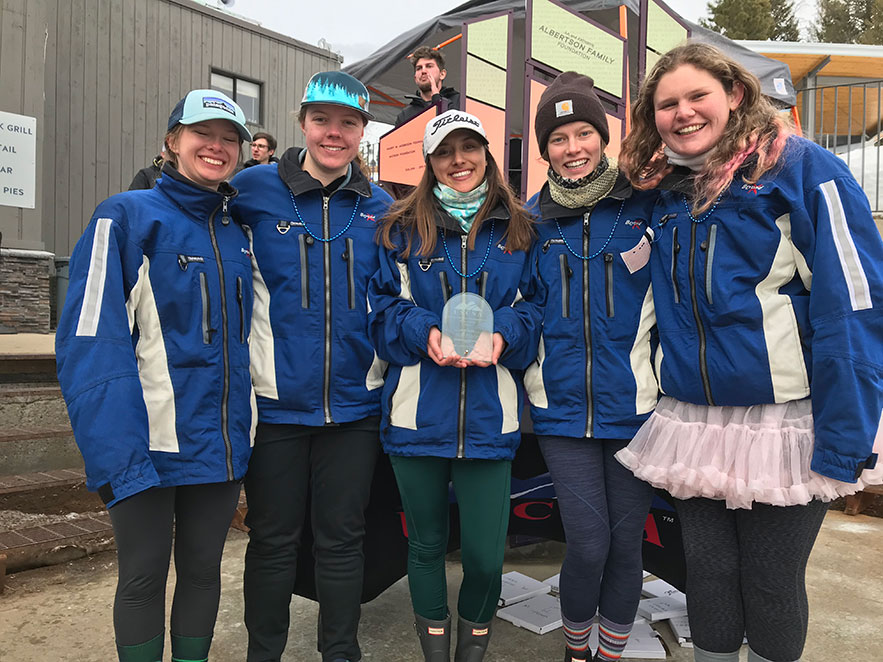 This kind of team bonding and energy was exactly what Carron and Hoffman hoped to find when joining Whitman’s Alpine Ski Team. During their college search, both women acknowledged the importance of skiing when it came to the school they would attend. While they were both primarily looking at the academic opportunities, they wanted to make sure that the school had a skiing team. Whitman fit perfectly with these requirements. Carron had lunch with the club ski team when she visited Whitman as a high school senior.

“Visiting the Whitman community in general influenced my decision and having that experience meeting the team is really what made me come here. It is important to have that social aspect and to love the people that you are hanging out with on the weekends” Carron said.

The Alpine Ski Team is one of seven club sports at Whitman College. The team isn’t only lifelong skiers like Hoffman and Carron, many of the athletes started racing in college. The night before a race, the team will sit down and talk about their goals for the race day ahead.

“There are so many different goals that people have, for someone it might be to finish, for someone it might be to make the flip, which would be to place in the top 30,” Carron said. “There are many different levels, and it fosters this environment where everyone is just out there to have fun and it doesn’t matter how you do, or how you place, everyone is just super stoked for you.”

They team attends four to six races throughout the season. Race weekends are long and jam-packed with not only racing and cheering on teammates, but cooking team meals and helping to set-up, time and orchestrate the ski races. Collegiate skiing at the Division III level is primarily organized and run by the students participating in the sport. This brings an element of dedication to the sport, since without it, the race weekends wouldn’t happen.

Since ski weekends can be demanding and include a lot of time away from campus, Carron and Hoffman have adapted their schedules to make sure they are as productive as they can be academically during the week so that they can focus on racing and having fun with the team on the weekends.

“I plan my time a bit better during ski season.” Hoffman said, acknowledging that a busier schedule requires her to be more on top of her assignments and responsibilities.

The Mount Hood ski race in February at Government Camp, Oregon, was the last race for many of the team’s senior skiers. As first-years on the team, Hoffman and Carron knew the importance of supporting the seniors who had welcomed them onto the team in their last collegiate race.

“I would say as a team, we have the best spirit at the start and so that was really fun for it to be their last race and for all of us to be cheering them on. Giving them all the love and support at the top,” Carron said.