Michelle Ferenz, the winningest basketball coach in Whitman College history, burnished her legacy on Friday when the women's team bested Pacific Lutheran University, 88–41, for her 250th victory in 16 years. Whitman now stands 14–0 for the season.

"You always hope that every season is about getting the most out of your team. We really did tonight," said Ferenz during a celebration after the game. "Our starters got off to a great start, and it was nice to see no let-down from the reserves. There were quality minutes from everyone."

"The kids keep getting better and better," she added. "It's mid-January. It's freezing cold outside. And they're having a blast."

Point guard Alysse Ketner '17 agreed, putting it this way: "The moment you become part of this program, you are family, and Coach treats each one of us as such," the economics major and math minor said. "She has created an environment where we all have the opportunity and desire to work hard and improve both on and off the court."

Interestingly, Ferenz, who also serves as associate athletic director at Whitman, chalked up her first win in the Northwest Conference (NWC) against Pacific Lutheran on Jan. 11, 2002. 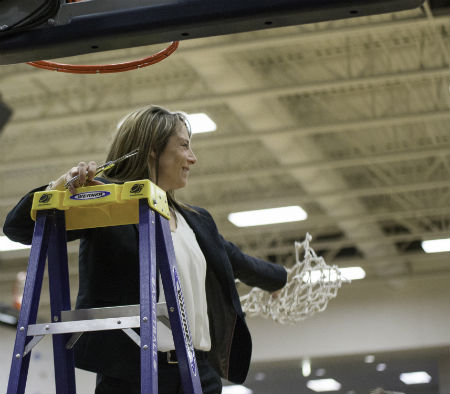 Former team member Heather Johns '15, who now works at the Fred Hutchinson Cancer Center, said that Ferenz "came to practice every day ready to fight, ready to push us. My junior year, our practices were some of the most intense, emotional times for our team. We knew each other's strengths and weaknesses and constantly exploited them, breaking each other down just to build each other back up, and, ultimately, come out the other side better. Yet, in this undeniably competitive atmosphere, we were a family through and through."

The key to her success, according to Ferenz, is being demanding—but supportive.

"They deserve my support and my honesty," she said about her squad. "We are always going to work hard, play great team defense, rebound and take care of each other like a family," she said. "Every loss, every win, every success or setback is shared."

But, she continued, it's the players that make the job.

"I am blessed to have been a part of so many remarkable young women's lives over the years and had the opportunity to watch them learn and grow as people, players and learners."

Other "by the numbers" about Ferenz: