Marcus Amerman ’81 is a unique melding of culture and circumstance.

Born in Phoenix, Arizona, to a member of the Choctaw Nation of Oklahoma and an Irishman, Amerman was raised surrounded by relatives who were members of the Hopi Tribe. Then his family moved to Pendleton, Oregon, home to the Confederated Tribes of the Umatilla Indian Reservation. Today, he lives with his elderly parents in Kooskia, Idaho, on the Nez Perce Indian Reservation.

It was in Arizona at around age 10 when Amerman's aunt, a Choctaw who married into the Hopi Tribe, taught him the techniques for traditional Native American beadwork.

And it was at Whitman College that Amerman first felt inspired to make art his career. His cultural background and Whitman education continue to influence his artwork, which is a combination of blood, upbringing and craft - while challenging assumptions about what it means to be a Native artist.

"The type of beadwork I do, it's a combination of Western realism and Indian color and geometry, so it's a melding of cultures - just like I am. It's natural for it to come out of me," Amerman said. 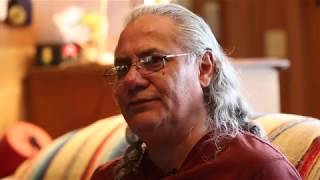 Amerman earned his bachelor's in art from Whitman in 1981. His brother, Roger Amerman, studied geology at Whitman for two years before transferring to the University of Oregon. The family was living in Pendleton at the time, and several people from Amerman's graduating class were coming to Whitman. At first, Amerman studied math and economics, but said he "wasn't cut out" for those subjects.

He found his passion for art while taking a sculpting class and learning metal work. He also spent a summer staying with a cousin who worked at the Institute of American Indian Arts in Santa Fe, New Mexico. Being surrounded by Native artists showed him what was possible.

After graduating, Amerman lived in Santa Fe, a city he described as a mecca for Native artists, and studied briefly at University of Illinois at Urbana-Champaign, home to the Chief Illiniwek mascot. The symbol included a student who would dress up in regalia and perform at athletic events. (The institution retired the symbol in 2007.)

"I immediately started protesting this affront to my senses," said Amerman, who said he hadn't been exposed to that level of overt racism. He didn't stay at Illinois long. "That short, three or four months activated me as an Indian activist. The amount of discrimination and prejudice that I experienced took my art on sort of a different track, in a way."

His work often carries a sociopolitical message, which is emphasized by the way he mixes traditional and modern imagery and styles. His art uses traditional Native beading techniques done over photographs to meticulously create detailed, photolike works of art. Amerman calls it "beadilism," in a nod to the pointillism style of painting developed in the late 1800s by Georges Seurat. 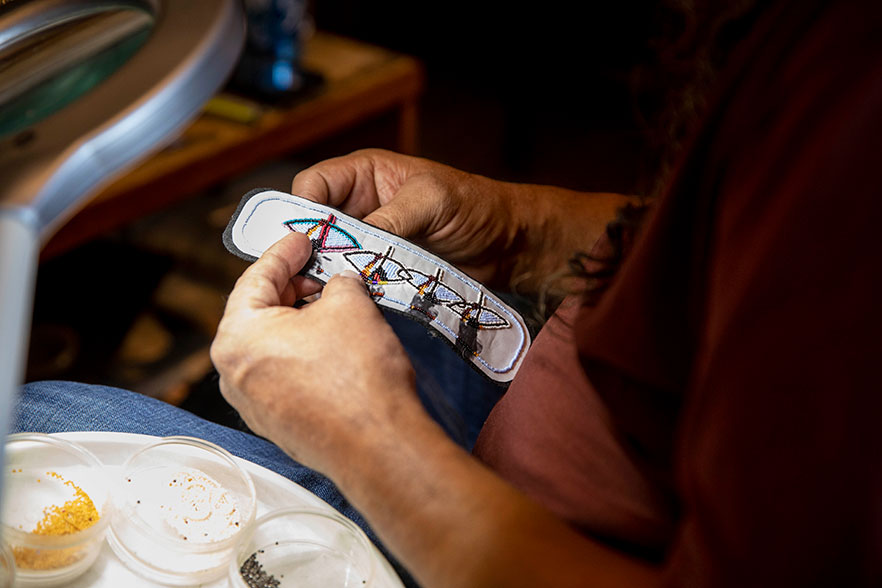 His time at Whitman also shaped the sociopolitical messages in his art, he said.

"If you're really going to those levels as an artist where you are sociopolitical, and are making statements about your times and what you see, then it's good to be versed in history, sociology, psychology, religion," he said.

"When I look at my art, I can see all the classes I took at Whitman - all the things I'm interested in: Geology, sociology, art history. ... I value the liberal arts experience and I feel like I use it. I feel like it's sparked my curiosity and ability to synthesize different ideas and connect un-connectable things."

Amerman's work can be found around the nation. In addition to pieces he sells at the Tamastslikt Cultural Center in Pendleton, his work is featured in two galleries in Santa Fe and can be seen at the Smithsonian's National Museum of the American Indian, among other museums and galleries. In 2014, he was named a USA Rasmuson Fellow by United States Artists, which came with a $50,000 award. Learn more about his artwork at marcusamerman.com. What Remains: NAGPRA Work at Whitman