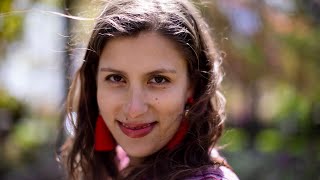 These are just some of the words that faculty and staff mentors use to describe Maddy Gold '19.

Gold, who graduated from Whitman College on May 19, 2019, with a degree in theatre and a minor in Spanish, had a very busy four years at Whitman.

"I think I've dipped my toes in a lot of different pools at Whitman," Gold said. "I've been able to work with different communities and that's been really, really empowering, and where I've found that I've been able to make the most impact in terms of collaboration."

"It's an award that really is about people who have a heart for children in this community and that describes Maddy," said Ben VanDonge '09, a fifth-grade teacher at Sharpstein Elementary School who nominated Gold for the award. They collaborated together on adapting a lesson on student activism to better fit the needs of the Walla Walla public schools fifth graders for WTTM.

"I nominated Maddy for the Art Regier Volunteer of the Year award because of how impressed I was with her ability to be flexible, her incredible commitment to the work," VanDonge said. "I was blown away by her ability to engage students and teach them."

This summer, Gold is staying in Walla Walla making socially engaged theatre with collaborators Erina Horikawa '19 and Donovan Olsen '19. The trio was inspired by "Because You Are Here," a project that began in Fall 2018 in Associate Professor Jessica Cerullo's devised theatre class and co-taught by Tia Kramer, a social practice artist in Walla Walla. The work is being funded through a Davis Projects for Peace grant and through Whitman's Ben Rabinowitz Award.

"Because You Are Here" is based on interviews with immigrants and first-generation members of the Walla Walla community. Gold said working on the play was a defining moment for her, and spurred her involvement in other social justice-focused programs. She now is on the art and social practice committee and the media and messaging committee for the Walla Walla Immigrant Rights Coalition, a relationship formed through the devised theatre class.

The play wasn't the first time she was exposed to social issues at Whitman. Gold began volunteering for WTTM through the Student Engagement Center (SEC) her sophomore year. Gold started as the logistics coordinator and planned and organized events on Whitman's campus. She is most proud of bringing the Martin Luther King Jr. march to campus on the 50th anniversary of MLK's death in 2018.

Her senior year, Gold served as the social justice coordinator for WTTM. She also had the opportunity to speak about socially engaged theatre at the national IMPACT conference in Virginia in February 2019.

"Many times, I've been able to sit and listen to an extremely well thought out plan and just celebrate her and watch her as she puts the people and the plans into action," said Susan Prudente, assistant director of community engagement in the SEC.

Gold will continue working to engage the public on social issues through her summer work. The grant project, "La Casa en Común Collective: Theatre Through Common Threads," will use methods learned in the devised theatre class to create socially relevant theatre in collaboration with the immigrant community of Walla Walla. The project will aim to bring awareness of the current climate surrounding immigration within the broader community. Additionally, she will work with students in the Valle Lindo Children's Home Society to make socially engaged theatre.

"I always thought that social engagement had to be separate from art-making and theatre-making until I was involved in a project in my sophomore year that combined them," she said. "It made me realize that they didn't have to be mutually exclusive."

For Gold, socially engaged theatre is about making space to have difficult conversations in a way that is productive and can create change.

"I think that I've created change", she said. "hopefully a small bit of change in how Whitman culture happens. I don't think I've changed it, but I think that hopefully I've moved it forward in a little way."