You may spot a few familiar names on the playbill for “The Comfort to Come,” which takes the stage at Walla Walla’s Gesa Power House Theatre this weekend. The play, which follows a woman’s journey through early onset Alzheimer’s disease, was written by Lisa Battle ’07, directed by Whitman College Professor Emerita Nancy Simon ’63, and stars Shauna Lilly Bogley ’83, Kevin Loomer ’84, Kathryn Bogley ’15 and Julie Jones ’79.

“I called [Nancy Simon] thinking I was calling my coworker also named Nancy. I was so excited and pleased by my mistake that I called her back later just to catch up,” Battle says.

Although she had looked Simon up several times when visiting Walla Walla in the first few years after she graduated, Battle says they hadn’t really kept in touch since then so there was a lot of ground to cover when the two reconnected. During the course of their conversation, Battle told Simon about “The Comfort to Come,” which she first developed as part of the “Works in Progress” series at The Barrow Group Theater in New York City and later produced virtually via Zoom after the plans for an independent production of the play were thwarted by the pandemic. Simon’s interest was piqued, and she asked Battle if she could read the script.

“I was honored that she would read it,” says Battle. “So I was over the moon when she asked if she could direct it at the Gesa Power House Theatre” 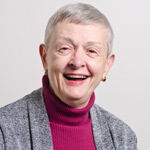 The phone call wasn’t the first time serendipity brought the two together. Battle recalls a chance run-in during a spring break trip to New York in her first year at Whitman, not long after Simon cast her as the lead in one of her first college productions.

“I was in the Metropolitan Museum of Art's gift shop, telling my friend that I was worried that I would never remember all the lines for a play I was in. The woman in front of me turns around—and it’s Nancy. She told me that I needed to get started!”

Encouraged and inspired by Simon, Battle went on to major in theater and over the years her roles at Harper Joy Theatre ranged from acting and directing to behind the scenes work like sound design, stage management, costume production and even making prosthetic noses.

“I felt like every production presented countless moments of problem solving, countless opportunities to be creative and learn. Whitman theater showed me how possible and wonderful it was to create your own pieces of theater,” Battle says. 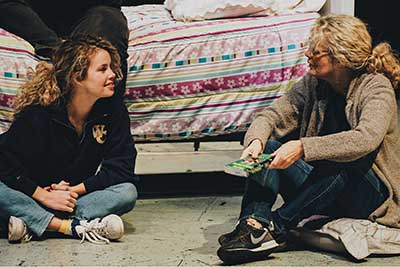 Inspired to Inspire Others

After graduating, Battle and some of her Harper Joy friends formed Formerly Whitty Productions, created a play and spent the following year touring it on the Canadian fringe festival circuit before she went on to pursue a graduate degree.

“I went to NYU to get my master’s in educational theater and never really stopped creating,” she says.

An alumnus of the British American Drama Academy who also performed with the People’s Theater Project in Manhattan, Battle was an Arthur Miller Fellow working as a drama teacher at a public middle school in Queens, New York, before the pandemic. Today, she is teaching in California and credits Simon as one of the reasons she went into education.

“Every time I direct a play, I want to make my students feel the way I did in a Nancy production: supported, important, and safe to take risks,” Battle says.

“The Comfort to Come” runs at 7 p.m. on Friday, Nov. 19 and Saturday, Nov. 20, and at 2 p.m. Sunday, Nov. 21 at Gesa Power House Theatre. There will be a live Q&A with Lisa Battle following the Nov. 20 performance. Read more about the play and purchase tickets.