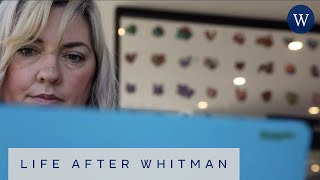 Sociology and geology major Kelly Katon '01 is the manager of events at Pokemon Company International in Bellevue, Washington.

Katon found her passion for event planning the first day she stepped foot on Holland America Line cruise ship as crew staff and there was a sail-away party happening on deck.

"Everything is so well planned. The cruise director is on the microphone welcoming everybody, introducing all of us, then the band of course is playing high-energy music," she said. "I stood there and I said ‘I want to run things just like this. This is what I want to do.' I knew that I'd found my calling."

Katon stayed with the cruise line for 10 years, first as a DJ and then stepping into the role of event manager. She then moved to land and worked for Seattle Seahawks for three years, where she planned around 40-50 concerts per year at CenturyLink Field and WaMu theater in Seattle, Washington. Katon was approached by a recruiter from Pokemon and decided it was a good fit to take the job. She's been there since November 2018.

At Pokemon, Katon oversees all of the business-to-business events such as the Nuremberg International Toy Fair in Nuremberg, Germany, forward-facing large-scale consumer tournaments, which includes four international tournaments a year, and manges all of the Pokemon assets, including the balloons you would see in the Macy's Thanksgiving Day Parade.

"What motivates me to keep going in this business is every event is different. It's an exciting industry to be in. Pokemon is constantly evolving," Katon said.