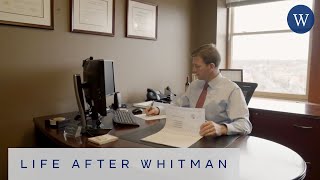 When John Cunnison '95 started at Whitman College, he thought he wanted to be a doctor. But in a first-year class with now-Emeritus Professor Timothy Kaufman-Osborn, he discovered politics. Driven by intellectual curiosity, after he earned his bachelor's in politics from Whitman, Cunnison traveled to Kunming, China, to teach English through the Whitman in China Program.

He lived in China for about a year, returned briefly to the states and then went back to China for more schooling and to find work.

"Every day I would send out four cover letters and four resumes with a note that said, 'I'll call you in four days,'" Cunnison said.

That persistence landed him some interesting interviews, until eventually got a job working for a small consulting company for the health care industry.

Cunnison went on to earn a master's degree in Pacific International Affairs from the University of California San Diego. He then joined Ernst & Young, a global accounting firm, in the customs and international division. Today, he is the chief investment officer at Baker Boyer Bank in Walla Walla, Washington. He started at Baker Boyer as a business lender and has worked for the company for 13 years.