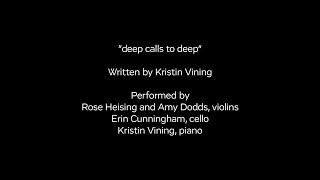 Listen to "deep calls to deep"

As Rose Heising ’20 and Erin Cunningham ’20 stepped into Chism Recital Hall on March 12, 2020, they didn’t know it was about to be the last rehearsal with the trio of their college careers.

As they prepared to put bow to strings with trio member Amy Dodds, senior lecturer of music and director of strings, and Kristin Vining, composer, pianist and studio music instructor, they received notice from President Kathy Murray that Whitman College was moving to online learning following spring break, in response to the COVID-19 pandemic.

“I’ll admit I was crying as we did one last run through each of our pieces,” said Heising, a violinist and theater major who is minoring in music and Japanese. “We had our last orchestra rehearsal that same day, and even though these last runs were not the polished performances we would have wanted for our final concerts, I think they were made much more poignant and bittersweet and really made me treasure every note.”

It was emotional for all of them, Vining said.

“After we got the news, we played through Gwyneth Walker's ‘A Vision of Hills’ together on Chism stage,” Vining said. “I could barely read my music because of the tears in my eyes. Amy Dodds had given the string players an image for that piece of calling out to each other over a great distance.”

That imagery came back to her as she worked on “deep calls to deep,” a piano piece she was writing for friend and artistic collaborator John Passafiume, a New York City choreographer who oversees the annual Summer Dance Lab held at Whitman.

“When I started thinking about writing something for this Whitman trio, I remembered Amy's image of calling out to each other from a distance and wanted to try something with the themes from ‘deep calls to deep,’” Vining said.

So, she rewrote the piece with cello and violin parts, keeping in mind the idea of a call and response. Heising and Cunningham, a cellist, and politics and music performance double-major from Seattle, received only their parts, with instructions to play it like a chant, and to use their own phrasing and tempo.

“Now the idea of calling out to each other from a distance was no longer an image, it was real life,” Vining said.

“Hearing it all together was magical, because strangely the tempos we had all chosen separately lined up,” Heising said. “It does feel surreal to listen to it, because playing in an ensemble usually requires so much listening and intuitive response, which is just not possible right now.”

“I was struck by the adaptive nature of musical collaboration. A silver lining of the current state of social distancing might be that it provides us with an opportunity to explore these modes of creation,” Cunningham said. “I hope that this expansion continues in the future, even after distancing becomes less necessary.”

What Remains: NAGPRA Work at Whitman