The thesis projects for Whitman College's 15 senior art majors were featured in a virtual gallery show, hosted by the Sheehan Gallery. Sheehan Gallery co-directors Kynde Kiefel and Daniel Forbes, along with Sheehan Gallery Assistant Tara Graves, put together the virtual show as a way to showcase the hard work of the senior class. In normal times, the exhibit would have rounded out the gallery’s academic year of shows. It would have been showcased during graduation and the summer. Kiefel was responsible for building the website and spent countless hours collecting content and designing the website.

“I have just been so impressed with this class, with their adaptability and creativity and their resiliency, people took over shed spaces or reconfigured their homes so that they could do their work,” Forbes said. “For some of the students, not having access to their studio or the clean space of the gallery in some ways was transformative for their work in positive ways. It made them recontextualize what they were doing and brought new layers of meaning to their work.”

The art seniors drew inspiration from the strange times of COVID-19. Lex Lupton ’20 from Ellensburg, Washington, found herself transporting home a disassembled couch — the centerpiece of her thesis titled “make yourself at home.” Lupton explored the ways in which our notions of home are challenged during this time.

“This work evolved during the 2020 COVID-19 pandemic, applicable to timely reflections of how bodies that ‘stay-at-home’ and those unable to do so relate to notions of the home,” Lupton said.

Lupton also found herself challenged as she had to move her project space from her home in Walla Walla to her home in Ellensburg after spring break.

As difficult as it has been for Lupton and the other seniors, they also found unique ways in which their artwork has been influenced. Lupton came to realize that her thesis took on new meaning outside of the gallery.

“I wanted to move into more sculptural work that was talking about notions of the home using objects from the home being pieced together to deconstruct how we relate to belonging and connection,” she said. “So that was my original goal — and I was going to do it in the gallery space. I bought this couch for $5 and I literally split it into half. It worked out well having the couch be in a home to talk about the home rather than in the gallery, but that was something that I could have never foreseen.”

Tess Francavilla ’20 also found herself making do with a new gallery and workshop space. The senior from Santa Barbara, California, stayed in Walla Walla for the duration of the semester and turned her front yard into her workshop.

“My studio became my yard. Working outside was actually very helpful because I use mud a lot and I am very messy. Having more space outside allowed me to try out things, with different configurations,” Francavilla said.

Francavilla’s thesis, titled “I am a House” draws on the inspiration of Robert Gober’s “Haunted House” and Lynn Hershman Leeson’s early works with film and art, as well as Doris Salcedo’s use of furniture in art. Francavilla also found inspiration in response to times of disaster. In January 2018, Francavilla’s hometown was devastated by mudslides, killing 23 and destroying many homes. This event inspired her to create her own miniature mudslide onto a bed. This art piece sparked her interest in house imagery and the house as a metaphor.

In the wake of the February 2020 Walla Walla Valley floods, Francavilla decided to walk the shores of the Columbia, collecting debris and driftwood to construct the bed that is part of “I am a House.” Francavilla’s piece also has a live performance that was recorded and posted to the website.

Peter Leyden ’20 didn't have a studio to return to after spring break, so he found a new space, and optimistic outlook to these unexpected changes, while he worked to complete his senior thesis, titled "Big Ears: Creatures of Whimsey and Foreboding." (See video below) 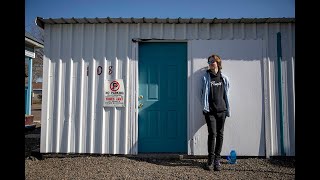 While the students would have loved to have had their artwork on display in Sheehan, the virtual format has allowed them to share their work with family and friends that would’ve otherwise not been able to experience it.

“The website has been a big joy – having that accessibility has been one of the positive sides of the online gallery,” Francavilla said.

Lupton appreciated having the ability to share her artwork with family and friends. She also is excited to have her work in a virtual format to showcase it for future employers and as she looks to continue her education into graduate school.

“I feel like it’s a great step in the right direction to have a kind of online format where so many can see the work and can connect to it. It's far-reaching in the sense that people that maybe weren't able to come to Walla Walla, now have a way to view it, as well as it being longer lasting because this website will probably be up for a while, they plan, and the exhibit would've kind of culminated after graduation,” Lupton said.

In addition to the online gallery, Forbes put together a catalog documenting the process behind the final pieces seen on the website. These “process shots” document the earlier pieces from the semester that show the trajectory toward the final showpiece. The 128 page catalog is now available online in a free ebook format, or is also available for purchase as a hardbound book.

“It's nice because you can kind of flip through the pages and that actually, in some ways, is giving us an opportunity to show a little bit richer and deeper picture of the senior's work because in addition to their artist statement and images of their final thesis project,” Forbes said.

Forbes, Kiefel and the art department faculty and staff worked hard throughout the process to make sure that the students had all the materials that they needed, wherever they were. Materials were mailed to students, workshops were set up in backyards, and more. Graves, who joined the Gallery in November was able to aid students as they worked to document their projects. Graves has a background in professional art photography. While the virtual format is a completely different experience than that of a gallery, Kiefel believes that the work of the seniors transcends the screen.

“It is funny in this online world, for a gallery space it is extra strange for me to perceive of only screens, I feel like we feed off the presence of the visceral piece, I feel like there is really strong work in there and you can hear it through the screen and you can still appreciate those works online,” Kiefel said.