Written by Afrika Brown
Photography and videography by Rebecca Devereaux

Fall 2018 marked Whitman’s first offering of Devised Theatre, a unique class that allowed students to experience the contemporary method of creating theatre, known as “devising,” in which collaboration, improvisation and ensemble work are necessary for a project to take shape and be brought to life onstage.

“The beginning was just basically being curious, and wondering where we could get information,” said Jessica Cerullo, an associate professor in the Department of Theatre and Dance.

Cerullo chose to center the class around the hot-button issue of immigration and how it impacts the greater Walla Walla community.

“There were some things that I noticed and some of the students noticed about immigration, migration and the Walla Walla community and we wanted to know more,” Cerullo said.

The path of inquiry the students and Cerullo followed led them to Whitman’s Northwest Archives in the Penrose Library, where they learned there was no information about the Mexican migration to Walla Walla. The lack of documentation became the genesis of the work the students devoted themselves to during the semester. 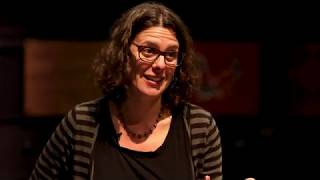 The Devised Theatre course was open to theatre and non-theatre majors. The only prerequisite was a willingness to learn and be open to new experiences. Dani Schlenker ’19 is a theatre major who first participated in devised theatre projects while studying abroad in London.

For Schlenker the process of the class itself was equally as important as the performance the students created because of the relationships that were formed between the students and community members and the conversations that happened because of those connections. 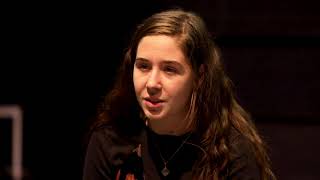 Dani Schlenker '19: What I learned

Schlenker believes that one of the benefits of the course is that it’s open to all students.

“We’ve seen students who’ve never been in a class like this really enjoy it a lot, and have a great time, and contribute a lot,” Schlenker said.

For Cerullo, two of the lessons that touched everyone in the class were learning how to listen and incorporating their education in a way that is completely out-of-the-box. 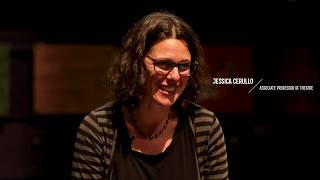 Erina Horikawa ’19, a race and ethnic studies major, learned about the Devised Theatre course while in history class and decided to take a chance.

“I wanted to take the class because there was interviewing involved, and it was outside the traditional classroom,” Horikawa said. “I was also interested in immigration. The factor of meeting community members and not just learning from books and articles really appealed to me.”

Devised Theatre helped Horikawa, who emigrated to the U.S. with her family from Japan, bridge a connection with the interviewees and her own migration experience. It also assisted her in finding her voice and creating without fear of judgment. During the class, Horikawa was asked to write a reflection that manifested into a poem and eventually blossomed into a spoken word piece that she performed during the Freedom Songs Concert in November.

The experience of Devised Theatre was one Horikawa found to be empowering. 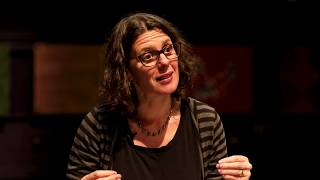 What makes this course unique

The research, interviewing, transcribing, devising and rehearsing culminated with “Because You Are Here,” a performance that celebrated the many untold stories of migrant community in Walla Walla. The show was held at the Harper Joy Theatre Dec. 6-8, 2018.

As a supplement to the performance and to ensure the stories would not be forgotten, the students in collaboration with members of the community and guest artists Eric Olson, Gary Grundei and Tia Kramer created HEAR HERE, Walla Walla. This public phone tree is available online at http://hearherewallawalla.com/. A physical installation of the phone tree was introduced during the performances and was used by members of the audience.

HEAR HERE, Walla Walla was co-sponsored by the Whitman College Innovation in Teaching and Learning fund and the Andrew W. Mellon Foundation. The project was presented in collaboration with the Walla Walla Immigrant Rights Coalition.

Following the performance, the students said the course had shifted their perceptions of learning and provided them with skills and lessons they will carry with them far beyond the course’s 14 weeks.

“This class has already changed my life trajectory. It's infused in who I want to be,” said Maddy Gold ’19. A theatre major, Gold used the project created in the class as her senior thesis, but the discoveries she made about herself and the community of Walla Walla has left an indelible impression.

“This project makes me reach out to other people who I don't know and ask them questions, instead of assuming anything about them, this is both in school and also outside,” Gold said. “Yeah, I think curiosity is the biggest thing I’m going to bring throughout my next semester at Whitman and throughout my life.”