Whitman Teaches the Movement builds on its momentum 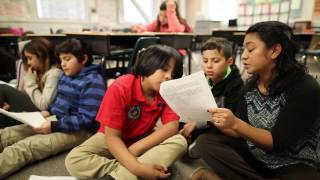 This video excerpts a discussion Whitman students led at Walla Walla's Green Park Elementary, which offers dual language instruction in English and Spanish, on the challenges of adapting to another culture and other immigration issues. Fourth-grade students, a new age group added this year, learned about Dominican-American author Julia Alvarez and interviewed each other about how to deal with bullying and discrimination.

According to student organizers, the number of Whitman volunteers increased by 75 percent this year:

"It was really amazing to see," said theatre major Maddy Gold '19. "It's not every day that you have issues that people all rally behind, and this is one."