How to watch the solar eclipse at Whitman

If you're in Walla Walla for this Monday's eclipse, you can get a closer look by heading to Whitman's Ankeny Field to view it for free. We caught up with Associate Professor Andrea Dobson '82, chair of the Astronomy Department, while she was setting up and testing a telescope for viewing.

Tell us about this setup.

What is the difference between looking through the telescope and just looking at the sun with your eyes?

The telescope has an eight-inch diameter mirror, so it will give you a better resolution image than what you would see with your eyes. The image of the sun we are getting with this particular sun funnel is about four inches across and you can see a sunspot on there today. There aren't many sunspots right now because sunspots come and go in an 11-year cycle and we are almost at the bottom of the cycle. So the sun has been pretty boring lately, but if there are spots, you'll be able to see them on the sun funnel. You wouldn't be able to pick them up with your eyes unless they are huge, which they won't be at this time in the sunspot cycle.

What's the difference between staying in Walla Walla for the eclipse and going somewhere that is in the path of totality? 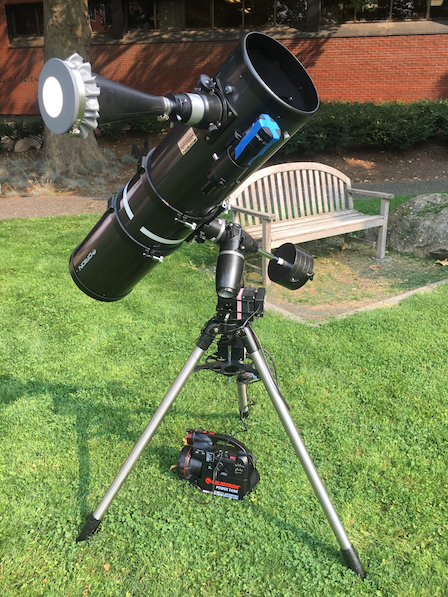 It's different because even with 97 percent of the sun covered, it will still be light out. I mean, we've had a sort of dim sun lately because of all the smoke and the haze. With 97 percent covered, if you looked out and actually thought about it, you might notice that it didn't look as bright out as it should be, but it would be as if there was just a cloud that passed in front of the sun or something. It will still be bright. When you are in a total eclipse, the shadow crosses you, the temperature drops and the wind blows because of the temperature change in the air within the shadow, compared to the air outside the shadow. The streetlights may come on. The dogs may bark. When the moon completely covers the sun, you can see the sun's corona, the outer layers of the sun which you can't see even with a device like this telescope. The main light from the photosphere of the sun, which is where the majority of the light comes from, is so bright and overwhelming that unless you have a total eclipse or unless you have a special camera called a coronagraph that will block out the main disk of the sun, you otherwise can't see the corona. The moon will cover the disk of the sun much more exactly than any coronagraph can.

What will be the peak times of the eclipse in Walla Walla?

Solar eclipses happen every six months. Most of the time, the moon is either above or below the sun when it's going through new, but every sixth month, it's crossing that plane with the sun. So every six months, you get some kind of solar eclipse. But because the moon shadow is both very small and most of the time doesn't totally cover the disk of the sun, you have to be in a fairly specific location on Earth to get the eclipse. It's been a long time since we've had one that went straight across the continental U.S. The last one that was visible here in Walla Walla was in February 1979 and it was cloudy. I was here then; that was my freshman year at Whitman.