“It’s wonderful to see how many lives have been touched by this extraordinary man,” said Whitman President Kathleen Murray in the welcoming remarks about the longest-serving Whitman employee in college history. Throughout his Whitman career, from 1949 to 2009, and even afterward, “he seemed to keep a finger on the pulse of the college,” she said to the assembly in Cordiner Hall, and visited regularly.

Reid, an economics and business major, began working at Whitman in the offices of career services and admission upon graduation in 1949 and soon became assistant business manager and then business manager. His other titles included treasurer and chief financial officer from 1966 to 1990 and, upon initial retirement in 1990, special assistant to the president, overseeing Whitman’s 15 farms, among other duties, until his definitive retirement in 2009. He cherished an endearing and enduring nickname, “Mr. Whitman,” explained son Bill in his reflections.

Many Whitman honors came Pete Reid’s way, and some were alluded to at the tribute. Reid received the annual Town-Gown Award for advancing the college's ties to the area in 1975. Whitman renamed it the Pete and Hedda Reid Service Award with his permanent retirement in 2009. At his initial retirement in 1990, more than 200 gifts from classmates, family and friends established the Pete and Hedda Reid Scholarship endowment. There's also a Pete Reid Award for Young Alumni. His name adorns the campus center, completed in 2001. In 2016, Reid garnered the Alumni Association's highest honor, the Alumnus of Merit Award.

Reid also gave back to the city. He served on the local boards of United Way, American Red Cross, Sherwood Trust, and banks, hospitals and city committees. Reid supported his church, the Boy Scouts, Friends of Children of Walla Walla, Rotary Club and YMCA. In 1984, the Chamber of Commerce presented him with its Award of Merit. In 2015, the city of Walla Walla declared a Pete Reid Day. 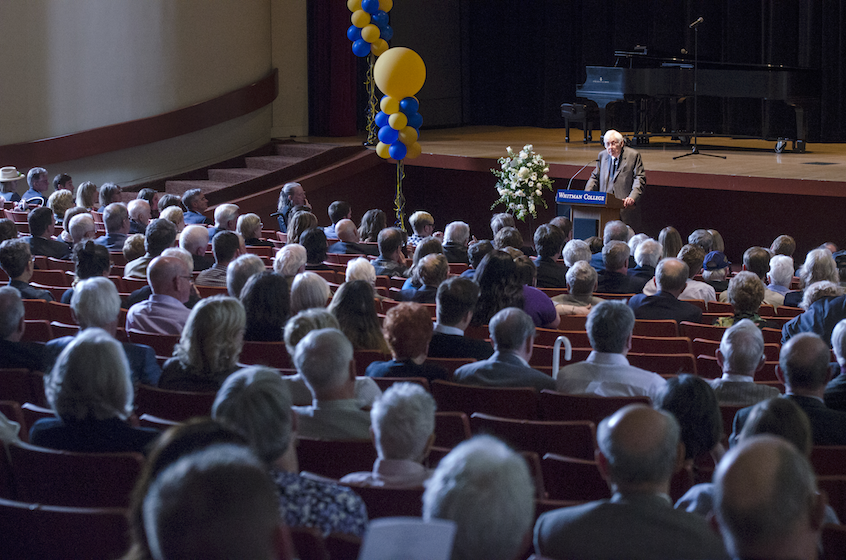 Son Bill stressed the legacy of the father and husband through examples that alternated from affecting to humorous. A “welcoming demeanor” allowed Reid to engage in conversation with anyone and everyone; that being said, Reid relished chatting to such a degree that he refrained from the art of the “timely exit.” And, “No,” his offspring further joked, “he didn’t use Grecian Formula in his eyebrows,” a line that also drew laughter since the bushy trademarks remained untouched by gray until death.

The patriarch made a point of eating dinner with his family—at “6:30 sharp”—and insisted on table talk. Meals, especially dinner, served as “the ultimate family time.” The Reids threw popular champagne Christmas parties and dad’s poker games at the dining room table were among the few times that mom permitted junk food in the house, son Bill remembered. Reid also organized yearly reunions at the beach when grandchildren came along. An avid outdoorsman, Reid sipped scotch with a dash of icy stream water when backpacking with his kin, and he skied with them until age 84.

Working with and for others seemed second nature to Reid. Son Bill praised the “great partnership” Reid practiced as a matter of course. He displayed it with his neighbors by taking up scouting; with his country by enlisting in the Navy in radio radar in late 1942; with his fraternity, Phi Delta Theta, by serving as president while a student and as chapter adviser after graduating; with Whitman by devoting his career to it; and with his wife by expressing his unswerving love.

Whitman homecoming king and queen, they married six months after graduation. His constancy to her matched her unselfishness toward his commitment to the school, son Bill explained. And when she was diagnosed with Alzheimer’s disease and moved into Washington Odd Fellows Home on Boyer Avenue, directly across the street from the house in which the couple had raised their family, Reid initially relocated with her. Ever onward, he ate lunch and dinner with her every day, son Bill recalled, until he could no more. 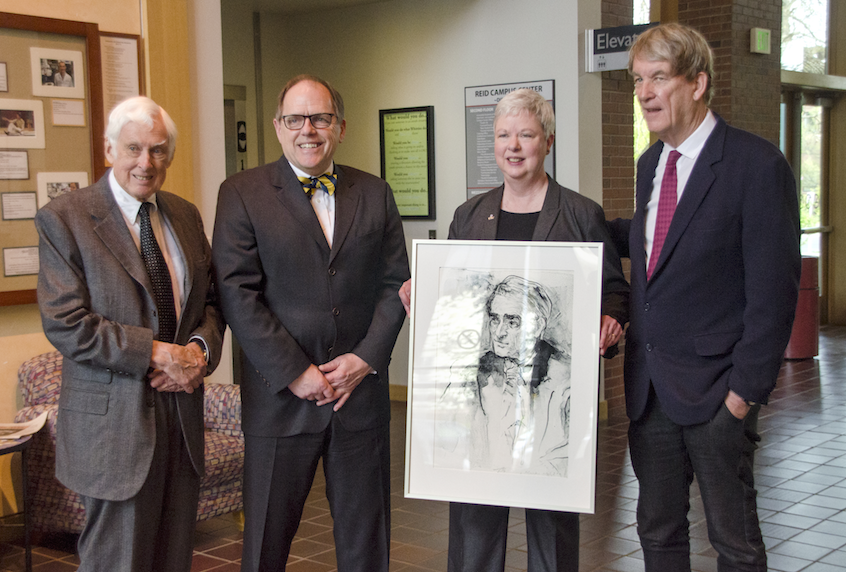 Whitman Presidents Emeritus Tom Cronin (1993-2005) and George Bridges (2005-15) listened with the rest of the attendees to fellow Whitman President Emeritus Robert Skotheim (1975-1988) articulate how the passing of Reid suggested “larger social consequences.” Through a persona equal parts “encouraging and forgiving,” he not only inhabited Whitman's halls for seven decades—“more than half of Whitman’s history”—and worked under seven campus presidents, but also modeled through “his exemplary life” countless inspirational possibilities for people “personally, institutionally and nationally.”

The best way to honor Reid, said Skotheim, was to “treat people the way he treated people.” How ironic, he pointed out, that nearly 70 years ago to the day he had bought his first suit from a haberdasher none other than Hedda Reid’s father. How apropos that the campus center was named after the Reids, he concluded, because it’s an “external sign of their internal grace.”

Other grace notes came from performances by grandson Curtis Reid ’10, son of James, interpreting “Precious Lord” to the accompaniment of pianist Jackie Wood ’87, Whitman senior lecturer of music, and by vocalist Monica Griffin Hunter, Whitman senior lecturer of music, leading the audience in the “Whitman Hymn,” also backed by Wood. People rose to their feet to chime in on the latter.

Rev. Andrew Cooley, interim rector at St. Paul’s Episcopal Church in Walla Walla, delivered the sermon, which asked rhetorically: “What gives a community its character?” Reid did, since this “legitimizer” influenced many people, Whitman and the city, Cooley answered. Reid wove his identity around being “part of the fabric that bands us together,” the cleric said, through the threads of “group enterprise” and “shared intelligence.” The passing of Reid “reminds us of the links we have to one another and to the institutions that connect us.”

The song that ended the hour-long tribute: “What a Wonderful World,” performed by Mark Brown on piano. As the crowd dispersed, he segued into “You’ve Got a Friend in Me.” 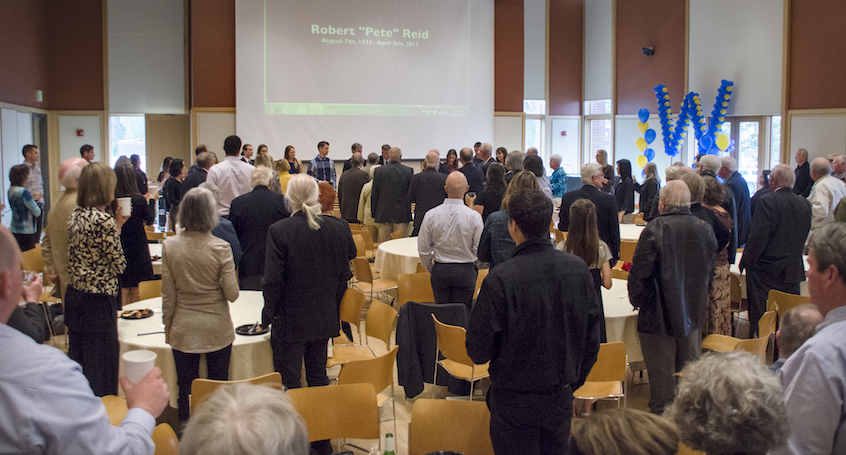 Reid’s friends and family and almost all from the mass of others offering their respects then walked across the street to the Reid Campus Center for a reception hosted by President Murray in the Young Ballroom. A framed black-and-white sketch of Reid and a complementary rendition of his wife on easels bracketed the entrance to the gathering place.

Son Dan Reid initiated a toast to someone “whose glass wasn’t just half full but overflowing.” The brimming congregation reminisced over refreshments for more than an hour. And when the Reid family announced a slideshow of the departed in fine, robust form over the eras alongside loved ones, seemingly everyone in the packed house hushed to watch.

Reid descendants created it. The soundtrack included “Forever Young,” “Stand by Me” and “Unforgettable.” 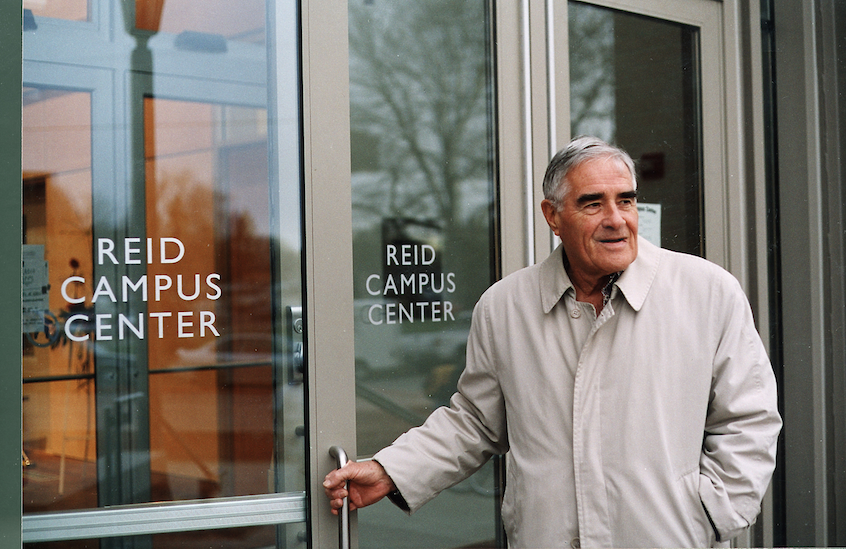