"There's been a steady movement toward tighter and more managed message and image control," in the White House, no matter the political party in office, explained Ingwerson, who spent 37 years with The Christian Science Monitor, including as White House correspondent during the George H. W. Bush and Bill Clinton administrations and, most recently, as editor. This scripting poses a problem, he continued, because divisiveness ultimately ensues. And when sides are so far apart, "here's what happens: it creates a vacuum and fear fills it."

Ingwerson titled his hour-long talk, sponsored by Whitman's Office of Communications, "Covering Trump: Fake News, Alternative Facts and What Matters," and he peppered inside stories with cautionary tales. Ingwerson shared a phone booth for an office in the White House,  strove to find an angle in briefings attended by scores of competition and was granted an interview with Bush two years after making it―and without any notice. A somewhat "filtered view of reality" emerged in the "competitive" Bush administration, "hipper, strategic-minded" Clinton administration and an Obama administration that "closed off news leaks." 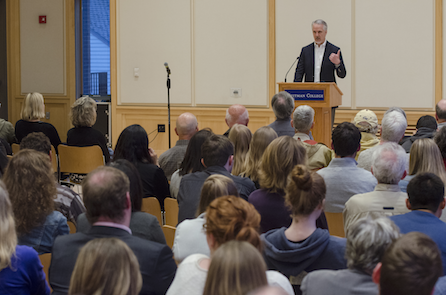 The Trump administration has taken this slanting to another level, he said. Ingwerson, whose daughter, Ellen Ingwerson '20, attended the event, said Trump "threatens the quasi-theological foundation" of journalism. "On one level, it's a very normal White House" because it's "reasonably responsive" to media queries. On another level, "Trump's challenge is the path to truth itself." Media rely on "objective, verifiable facts" that provide humanity with "common ground." Trump, he said, ignores evidence and verification and instead "spins narratives that resonate with people even though the facts don't support them." These stories ring true for Trump supporters due to emotional investment in them.

In other words, Trump "starts with the storyline and moves to the facts that fit them," he said. So even though "the whole way of dealing with the world is by facts and verification, Trumps blows them away as attacks against his beliefs and values." The upshot becomes "which side you're on, which narrative you prefer." As a result, the media must "understand why we don't agree, and that's what good journalism does."

Along these lines, at a dinner beforehand to announce the winners of the 2017 Hosokawa Journalism Contest, Ingwerson, now chief executive of Principia, a nonprofit education organization, encouraged students to pursue this type of journalism. "It's fun"―the perfect reason to talk to anyone―it's "good for you"―since the skills apply to any field―and it "matters"―since reporting becomes a mirror people hold up to themselves, he said.

Ingwerson helped President Kathleen Murray present the awards to students who submitted work published in The Wire, the weekly student-run newspaper, in the last year. Each award came with a $500 prize. Judges included award-winning reporters, editors and producers from The Washington Post, The Seattle Times, The Oregonian, The Walla Walla Union-Bulletin and San Francisco and Portland TV news, as well as a photographer who had been the National Press Photographer Association's photographer of the year. The Hosokawa Journalism Lectureship was established at Whitman in 2000 by David and Beverly Hosokawa and the Hosokawa Family Foundation. It honors Robert R. Hosokawa '40, David's father, by bringing a celebrated journalist to speak on campus each year.

Robert Hosokawa graduated from Whitman with honors in English and was considering law school when he and other Japanese-Americans were forced into internment camps at the start of World War II. He and his wife were freed from their confinement in Idaho only after a former Whitman professor found him a job with a newspaper in Independence, Missouri.

In his remarks, Ingwerson paid tribute to Hosokawa, who in 2004 published an editorial in The Monitor titled, "We Knew We Weren't the Enemy," connecting his experience as a Japanese American during World War II with the fear, suspicion and discrimination many Arab Americans faced in the wake of  9/11. Ingwerson called Hosokawa―who also contributed a piece on a related theme to The Monitor as a young man―"a crosser of divides" whose reporting "became part of the American story."

Read more about the history of the Hosokawa Awards.