Whitman College made history in the field of philosophy recently in two ways. The campus hosted the 51st annual meeting of the Heidegger Circle, with more than 50 scholars from around the world convening to discuss the renowned German thinker (1889-1976). And during the proceedings, the event organizer, Julia Ireland '90, associate professor philosophy at Whitman, was elected the first woman presiding officer of the group.

"I was thrilled," said Ireland, about the intellectual array. "It was an amazing thing for Whitman and such an honor to be asked to do."

Philosophers came to Walla Walla from as close as Washington State University and Walla Walla University and as far away as Poland, Israel and Puerto Rico for presentations such as "The Given and a Proximity to Art: Heidegger's Early Dialectical Conception of Phenomenology," "Heidegger as a Nazi Bureaucrat: An Archival Report," "Attention as the Way to Being," "Implications of Heidegger's Thought for Postnatural Enviromentalisms," "The Wind of Thought: Heidegger's Remembrance and the Technological" and "What Is Called Drinking?: Heidegger and Wine."

Students from Whitman, Berkeley, Gonzaga University and Reed College also attended the four-day conference that ran from March 30 to April 2. 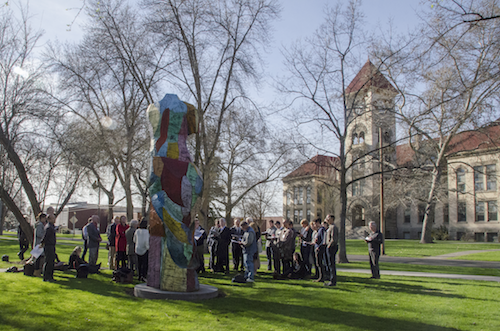 "It is fairly unprecedented for Whitman to host a national level scholarly conference," Ireland said. "The program modeled interdisciplinary engagement," a cornerstone for Whitman. "Harrison's keynote speech also was a highlight, as he's a rock star academic. And students were exposed to professional philosophers doing their thing, with campus programming occurring since September to help prepare for the event."

"My professional goal was to create an outstanding and edgy program that made the trek to Walla Walla worthwhile," Ireland said. "My goal for Whitman was to create a high-impact event promoting philosophy and humanities on campus in a thoughtfully integrated way, to showcase alumni, and to model for students what it means for a woman they see in class to have a power position in an extremely aggressive field."

And, she concluded, if emails received after the gathering are any indication, the event exceeded all expectations. "They were pretty glowing," Ireland said.

So, too, the reaction to Ireland's new office.

"Julia's election as the first woman presiding officer in the 51-year history of the single most important professional organization for the study of Heidegger in North America marks a major transition," said Davis. "When I became a member in 1990, you could count the women involved on one hand. Now well into the retirement of that generation of Heidegger scholars, Julia will be able to promote genuine inclusivity for the growing number of young women scholars. This is critical for the health of the study of Heidegger."