In 1965, Bruce Jones '67 helped organize a solitary march in Walla Walla for Dr. Martin Luther King, Jr. and the thousands of nonviolent demonstrators who, over five days and 54 miles, walked from Selma, Alabama, to the state capitol of Montgomery to register black voters in the South.

Last week, Jones, now associate director of admission at Whitman, spoke about, as he put it, that "activism from the inside as well as outside," at Kimball Theatre in Hunter Conservatory. As a history major, he chaired the campus friends of the national Student Nonviolent Coordinating Committee that crusaded with King for civil rights. More than 3,000 people marched with King; some 125 Whitman counterparts marched from Ankeny Field to the county courthouse. 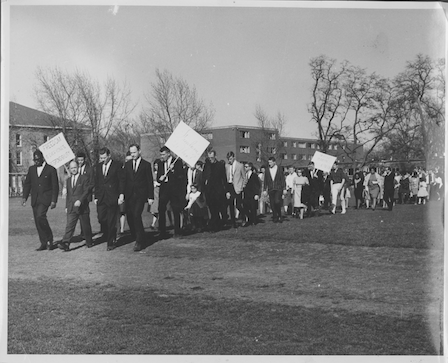 "I was galvanized by the movement," recalled Jones. "In living an activist life," he told listeners, "you come to the realization that you're running a marathon rather than a sprint." And each step forward, Jones continued, prompts the crucial question: "What comes after an uplifting, successful effort, whether it's a march or a demonstration or some other type of gathering?"

"What you do as a student activist, human rights advocate, or social justice change agent can influence your life for decades," said Noah Leavitt, associate dean for student engagement, about the reason for the remembrance. "Bruce recalled an important shared vision in Walla Walla and across the nation."