She reinforced this theme throughout her remarks—as did others. "I beg your forgiveness early, but my speech will not be light or frivolous," she told 374 eager Whitman seniors and thousands of their well-wishers at the 131 st Commencement ceremony. "I want to honor the fact that you are graduating into a world that is tight with tension and we, you and I, have real work ahead of us," she said. "If we are to address the challenges of our generation, we must be both intellectually and politically courageous in the face of questions of what justice needs to look like." 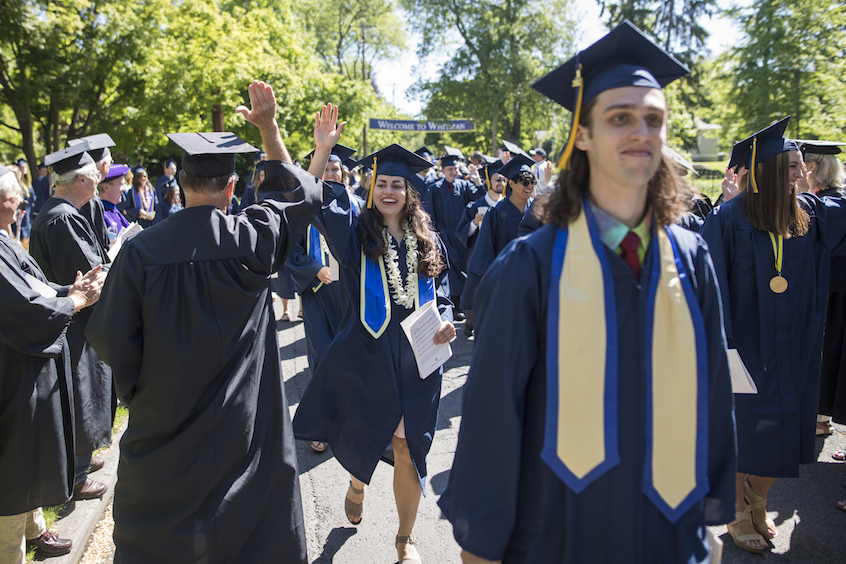 The Director of African Women in Agricultural Research, Kamau-Rutenberg was visibly moved when she took the podium to express values that Whitman also holds dear. ("I'm shaking," she admitted with a laugh.) She majored in politics at Whitman, earned a doctorate in the field, and in 2005 founded Akili Dada to aid high-achieving girls from under-resourced families in her native Kenya pursue education. For helping build what Whitman President Kathleen Murray termed "a more just, inclusive and sustainable world," Kamau-Rutenberg has been honored as a Champion of Change by the Obama White House, named one of the "100 Most Influential Africans" by New African magazine, recognized as a Ford Foundation Champion of Democracy, awarded the United Nations Intercultural Innovation Award and named one of Kenya's Top 40 Women Under Age 40.

Kamau-Rutenberg compared returning to Whitman—which awarded her an honorary doctorate—to coming home. Her presence resonated for politics major Faith Nyakundi '17, a former scholar of Akili Dada, who called her a hero. "Not only am I happy she is here. I am happy for the school and the wisdom she will spread to the community," said Nyakundi, who recently received the Russell J. DeRemer Award for Outstanding Involvement in Student Services, the highest honor given by the dean of students. 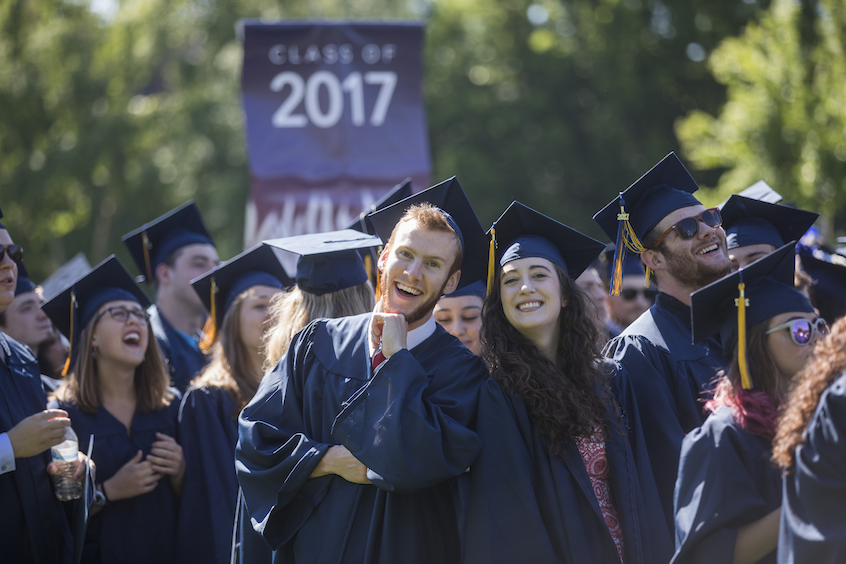 Pointing to the parable that to whom much is given, much is also expected, Kamau-Rutenberg said, "By virtue of this expensive and precious Whitman education, we are called to be part of the solution to very serious challenges." She added, "The arc of the moral universe bends toward justice, but it is the committed purposeful actions of change agents who reach into the sky to force the rainbow back to earth."

Observations like those prompted the crowd to give her a standing ovation at the conclusion of her talk. Similarly, attendees rose to their feet when hearing that federal judge James L. Robart '69 also would receive an honorary doctorate. Trustee emeritus and former chair of Whitman's Board of Trustees, he made international headlines with his ruling that halted President Donald Trump's first executive order banning citizens from seven Muslim-majority countries from entering the United States. 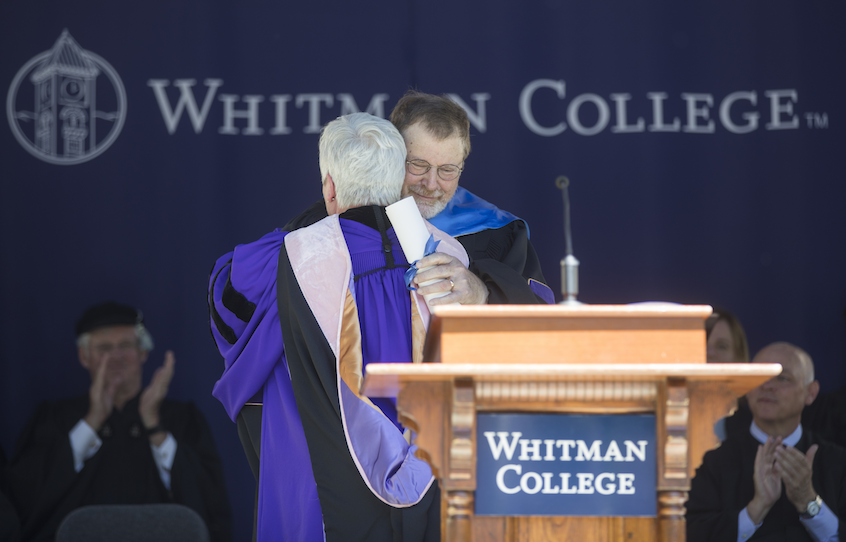 President Murray also encouraged the graduates, who hail from 26 states and U.S. territories and nine countries, to continue developing their capacity for empathy; avoid cynicism; and extend goodwill to one another even during times of conflict.

"As we continue to find our voices and to engage in difficult dialogues, I hope we will model empathy, grace and respect," she said.

Murray further paid tribute to the life of Thomas Zbyszewski '17, who lost his life in the line of duty while serving on a five-person Forest Service engine crew battling the Twisp fire in Okanogan County in 2015.

In keeping with tradition, members of the class of 1967 returned to campus for their 50 th reunion and participated in the ceremony. President Murray recounted historical milestones that marked their final year at Whitman: Aretha Franklin recording "R-E-S-P-E-C-T," the debut of Mr. Rogers' Neighborhood on PBS and the appointment of Thurgood Marshall to the Supreme Court. She wondered which global events this year's graduates will most remember 50 years from now: the Brexit vote, the announcement of the wrong "Best Picture" at this year's Academy Awards or the Chicago Cubs' historic World Series victory?

Other ties to Whitman's past included several legacy families who added to their long list of alumni. One traces its lineage back to the college's founding class. Among the four Whitman graduates that year was Christopher Columbus Gose, whose twin great-great-granddaughters, Maggie Gose '17 and Chloe Gose '17, graduated today, "connecting that small ceremony in 1886 to each of us and this ceremony today," as Murray put it.

For Maggie Gose, a biology major, enrolling at Whitman was "a serendipitous and easy decision." She added, "Whitman, and Walla Walla in general, have helped facilitate lifelong friendships, a terrific education and my own personal growth into adulthood. Leaving will be extremely difficult, but I also look back on my time at this rigorous institution and feel incredibly proud." 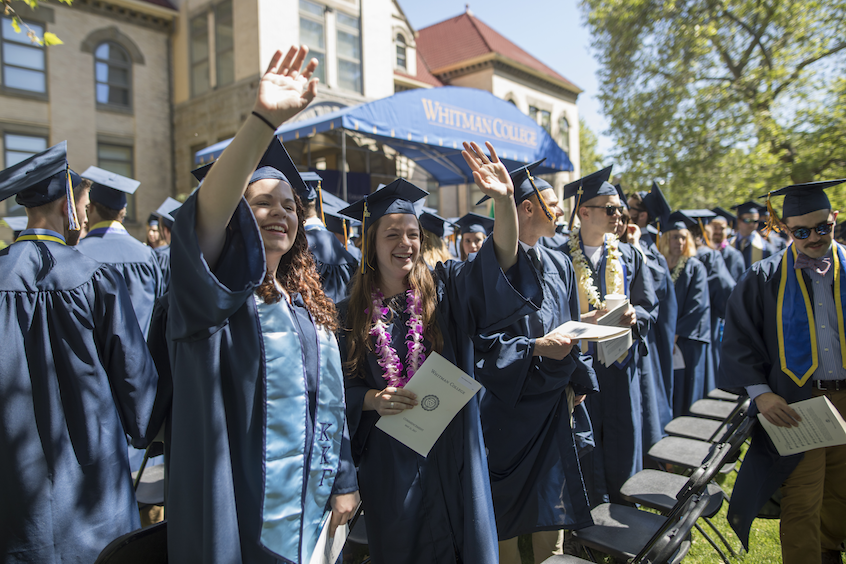 Members of the Gose family graduated from Whitman in the 1920s, '30s and '50s. There are currently more than a dozen Gose alumni, including Jerry Gose '50, the twins' grandfather, who attended Commencement today.

"Growing up, my grandparents always talked about their time at Whitman and the friends they had made who were still some of their closest friends," said Chloe Gose, who majored in sociology. "It has been a great experience being here at Whitman, and I can see how it was such a great place for my grandparents, and that the community they had is still here." 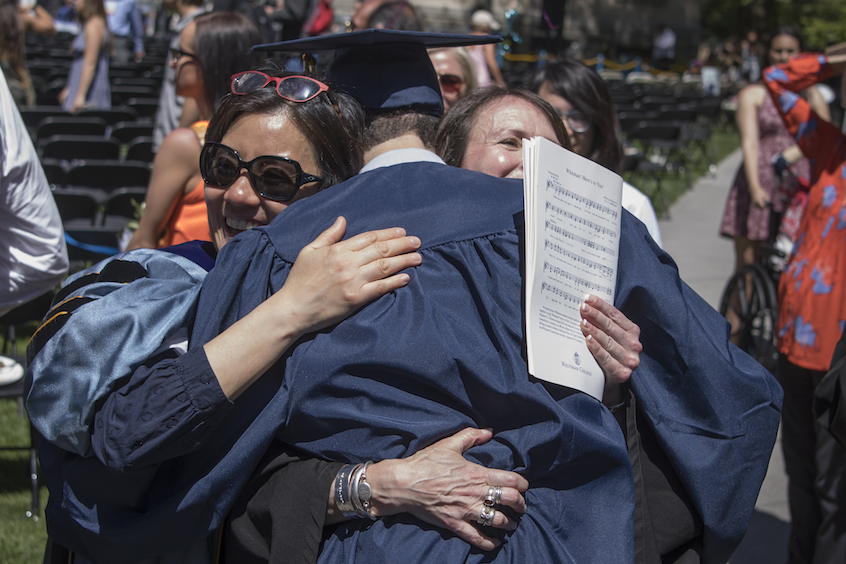 Faculty have "advised you, mentored you, opened their homes to you, engaged you with and in their scholarship, and, yes, taught you," said Brad McMurchie '84, chair of the Board of Trustees. "They are the bedrock of the college and they have devoted their careers to students like you."

In addition to honoring faculty, "your most important guides during your time at Whitman," Murray acknowledged the "parents, step-parents, grandparents, siblings and other family members who supported you throughout this journey."

"That the three of us are here today is confirmation that pursuing your 'little thing' does make a difference," she said. "In important ways, the story of these young women is very much the story of Whitman. It is the story of opportunity opened up, expanded and multiplied.  It is the story of how privilege can be leveraged into impactful social change. It is the story of us as a Whitman community and it is an incredibly hopeful story unfolding at a time when hope is much needed." 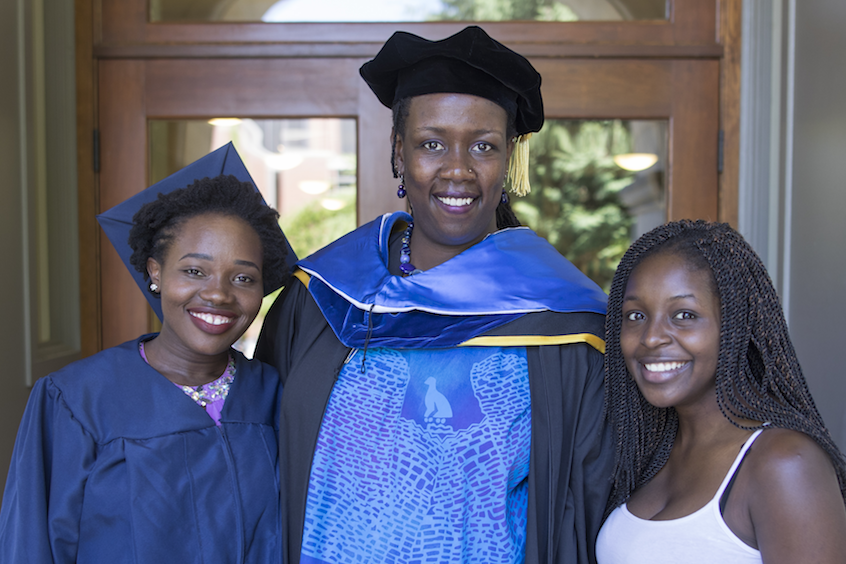