On a brisk Friday afternoon, the auditorium in Olin Hall was packed with Whitman students, faculty and staff—so packed that people lined the floor and looked in from the doorway. They crowded around to see the Eighth Annual Global Studies Symposium, titled "Human Zoos: Photography, Race, and Empire."

The Symposium featured presentations from guest educators Pascal Blanchard, Dominic Thomas and Stephen Sheehi. Whitman professors and students responded to the presentations and also included pieces of their own research.

The Global Studies Initiative is a program that seeks to develop the college's curriculum to cultivate a globally-engaged intellectual community, and to prepare Whitman graduates for an increasingly complex and globalized world. The program was originally launched in 2008 with a Mellon Grant, and culminates in an annual Symposium.

The first Global Studies Symposium explored the concept of torture. It featured speaker Marc Danner, a writer and journalist that wrote extensively about post-9/11 torture, specifically after the release of photos from the Abu Ghraib prison in Iraq. 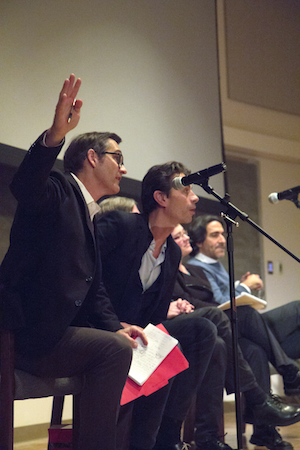 Global Studies starts in the classroom. According to Director of Global Studies and Associate Professor of Islamic World/Middle East History Elyse Semerdjian, 30 professors and staff members participate in a listserv where they share readings, scanned documents and other resources to teach material based around a decided annual theme. This year's theme centered around the practice of human zoos, the popular nineteenth and early twentieth century display of human beings in semi-permanent installations (at actual zoos) and as traveling "ethnic shows," circus acts and world's fair attractions in Europe and the United States. These zoos were developed in tandem with the production of ethnographic photographs, usually destined for Western travel albums and scientific collections.

"Sometimes our events are pretty conceptual because we want to bring people together across the disciplines so we have to find a concept that ties them together," Semerdjian said. "But there's something about human zoos and the visual representation of the Other that I think resonates across the disciplines."

The impetus for the 2016 Symposium originated with artist Adnan Charara's offer to lend the Global Studies Program a collection of ethnographic photographs. Semerdjian, with the help of Sheehan Gallery director Daniel Forbes and student workers, developed a partnership with Sheehan Gallery called "Scenes and Types: The Adnan Charara Photography Collection," featuring original nineteenth century Middle Eastern, Native American, South Asian and South American photographs currently on loan to the College. This collaboration will include special programming throughout the Spring 2016 semester. They will also be publishing a booklet of faculty, student and staff writings on the photos and postcards later this semester.

The Symposium itself hosted the foremost expert on the phenomenon of human zoos, Pascal Blanchard from Le Groupe de Recherche Achac in France. Scholar of French colonialism Dominic Thomas from the Department of French and Francophone Studies at UCLA, and Stephen Sheehi from the Department of Modern Languages and Literatures and the Program of Asian and Middle Eastern Studies at William & Mary and a scholar of Orientalism and Ottoman era-photograph presented their research at the Symposium.

Sarah Cornett '16 worked as an intern for the history department and Global Studies over the summer, helping the Sheehan Gallery catalogue and organize the photos in the Adnan Charara Collection. She was also one of the student respondents at the Symposium. 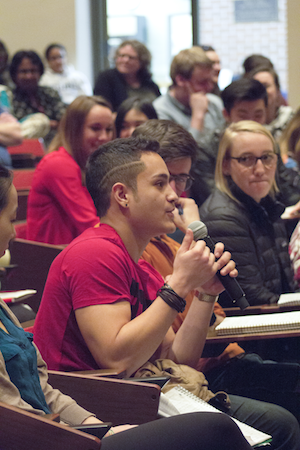 "It was so exciting to speak with Professor Sheehi, Pascal Blanchard and Dominic Thomas," she said. "Much of their scholarly work was vital to our summer project with the photos, and speaking alongside them was definitely a privilege. All three are regarded as some of the most important scholars doing work on 19th century representation and Orientalism. I felt like our project had come full circle."

Suzy Xi '16 also responded to Pascal Blanchard's research on Human Zoos. She got involved in the Symposium after taking an interdisciplinary environmental science class, Global Public Health, from Assistant Professor of Politics Susanne Beechey and Associate Professor of Biology Leena Knight because she was interested in environmental health. Beechy, one of the faculty respondents, recommended that she speak at the Symposium. According to Xi, they thought that it would enrich the program to have a student from the sciences offer insights into the role of "scientific racism" in the Human Zoo phenomenon.

"It was my great honor to have the chance to work with them," Xi said. "These scholars, as well as the Whitman faculty who participated in the event, were all experts in the field, and had in-depth insight to offer on the topic of racism. I could feel their 'aura' of knowledge, wisdom and experiences, and they are also incredibly easy-going and friendly to students."

There are 12 more Global Studies events happening over the course of the semester.

"It is my hope that some of the historical discussions about race will resonate with some of our contemporary discussions of race and complement the Power & Privilege Symposium," Semerdjian said.