Whitman Debate Argues Their Way to No. 1

Though their season has just begun, Whitman’s debaters have taken an early lead with some significant successes. The National Parliamentary Debate Association, one of the two formats of debate in which Whitman students compete, has recently released its rankings for college teams around the country. Whitman ranks first out of 120 teams, with a total of 80.17 points 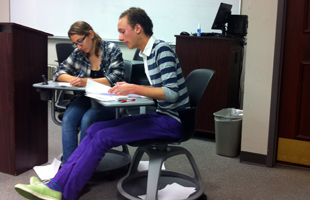 “We are very excited to see our younger teams improve and learn from the older teams,” Director of Debate Kevin Kuswa said. “We are also excited to start to build our momentum for the second semester and the national tournaments held in March.”

Ten Whitties compete in parliamentary debate tournaments, two of whom are first years. Can they keep up their successful run?

“It will be tough to say the least,” Kuswa said. “Lewis & Clark is very good and has a lot of depth, so they will be in contention for the top spot as we move forward. There are also a number of other programs that will certainly be very strong competitors throughout the season.”

A team of parliamentary debaters has seen extraordinary success, reaching the Elite Eight by beating University of Vermont and University of California at Berkeley. Marlene Anderson ’17 and Jonathan Barsky ’15 triumphed over those teams in elimination rounds at Salt Lake City.

“Making it to the elite eight at Weber really validated the hard work the team and our amazing coaches have been putting in,” Anderson said. “We had some great debates against some talented opponents and I think the team is looking forward to the rest of the season and continuing that work and hopefully that success.”

The Whitman Debate team spent Oct. 10-12 at Lewis & Clark’s Steve Hunt Classic. There, they competed against teams from 33 different states, debating topics from Turkey’s role in the battle against ISIS to strengthening the Voting Rights Act of 1965. Team Avery Miller ’17 and Arthur Shemitz ’17 are now ranked 23 in the nation for parliamentary debate. Kyle Hendrix ’16 and Noah Stern ’16 are ranked fifth, and Zac Parker ’15 and Margaret Rockey ’16 hold the number 1 spot.

“Being ranked number 23 is really awesome and surreal,” Shemitz said. “I feel very fortunate to be going into my second year of debating with the same partner (the ever-awesome Avery Miller), so we've been able to develop a really solid rapport, which isn't an opportunity that everyone gets.”

Whitman also competed in a tournament in Bellevue where Noah Stern ’15 and Kyle Hendrix ’15 made it to the quarterfinals. They also earned First and Second Speaker awards for the tournament out of over 100 varsity debaters.

“The whole school really supports the team, from the staff all the way to the administration,” Kuswa said. “It takes a village to run a debate program and we have an extremely encouraging and supportive village. The Whitman students have been very supportive of each other this season and it shows. We all know how good the Whitman students are and, when given the opportunity, they always shine.”