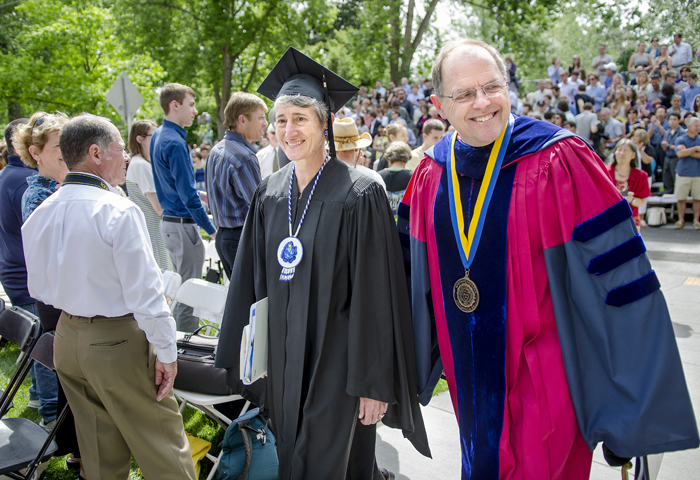 Jewell received an honorary Doctor of Science degree from Whitman. Speaking on the south lawn in front of Whitman's Memorial Building, Jewell told graduates who knew what their post-college plans were, as well as those who had no idea what came next, that they were "going to be great."

How did Jewell know this? Because, she said, they were earning a college degree from one of the top academic institutions in the country and that, as Whitties, they didn't know how to sit still. She noted that 40 percent of today's graduates had studied abroad for at least one semester, and praised the Class of 2014 for performing over 37,000 hours of community service in the Walla Walla Valley.

Jewell went on to explain that her path to becoming U.S. Secretary of the Interior was not linear but "circuitous." She started as a pre-dental student at the University of Washington before changing to engineering. She then went on to working in the oil and gas fields, which turned into a career in banking. What stitched this path together and led to her career in public service?

"It was my extracurricular activities that shaped that trajectory," Jewell said.

Kitty Brown, whose son Ben Duchin '14 graduated with a degree in economics, thought Jewell's speech was inspiring. Brown also said that she was happy her son had already found a job.

"Ben will be working for AT&T. He's joining 'the Man.' He's crossing over to the dark side," Brown joked.

"But we're going to miss Whitman and Walla Walla. The town's a fun place for parents to visit."

The ceremony started off with a greeting by Brad McMurchie '84, chair of Whitman's Board of Trustees. President George Bridges then opened Whitman's 128 th Commencement. Speaking to graduates, he said that Whitman students have a natural inclination to question, to consider global issues and implications, to investigate motivations and possible biases and to develop creative solutions.

Bridges made special mention of the first generation students who were receiving their degrees, noting that 12 percent of the Class of 2014 are the first members of their family to attend college.

Talking about the transformative experience of college, Bridges said that graduation for these first generation students is "a substantial achievement that will impact your family and its future legacy for generations to come."

The Class of 2014 enjoyed a comedic send-off by senior speaker Rosemary Hanson '14 from Tacoma, Wash., who earned her degree in anthropology with a minor in Japanese.

"I'm here to break some bad news," Hanson told her fellow graduates. "We're going to get old. And we may even get boring."

Like Jewell, Hanson also pointed out that the path forward is uncertain. But maintained this uncertainty is okay.

"The twelfth labor is over, the eighth semester done. We've beaten the final gym leader and, badge in hand, our next step is uncertain," said Hanson, who after Commencement will be teaching English in China.

"We have been handed a dysfunctional world and now it is ours to rebuild - fairer, greener and full of coffee shops."

After the ceremony, Hanson expressed mixed emotions about leaving Whitman.

"I'm going to miss Whitman, but I'm ready to move on. It's a great feeling, but I'm also sad."

Robert Manning '80 also received an honorary Doctorate of Science degree. Manning is the chief engineer at NASA's Jet Propulsion Laboratory. Manning and his team designed the rovers that made the celestial journey to Mars, including the Curiosity rover, which is currently exploring the Red Planet.

Whitman conferred 390 degrees on the Class of 2014. The graduates represented 15 foreign countries ranging from Thailand to Venezuela and 34 states in the U.S. from California to Maine. And the student who traveled the farthest to attend Whitman came from Lesotho, more than 10,000 miles away. Four graduates are local to Walla Walla.