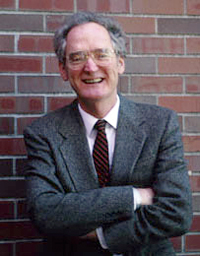 Cushing Eells Emeritus Professor of Philosophy and Literature Patrick Henry has been named the Ida E. King Distinguished Visiting Scholar of Holocaust Studies at Richard Stockton College of New Jersey. In an interview, he explains why teaching about the Holocaust is vital, what made him come out of retirement and what makes a noisy college classroom turn so quiet one can hear the proverbial pin drop.

Edward Weinman: How do you teach about the Holocaust, one of the ugliest chapters in world history?

Patrick Henry: Carefully. You can’t teach it as some type of bullying. You have to teach it for what it is. I have to let students know that this is a possibility of human behavior. It’s a story of ordinary people. Those who were able to slaughter their fellow human beings and those who tried to save them. You also have to let them know that this horrific event happened in one of the most culturally sophisticated generations of our species. So there is no saying that this can’t happen again.

EW: How did you become so interested in studying and writing about the Holocaust?

PH: I grew up in a Jewish neighborhood in New York City. I would hang out at the temple and play lots of basketball. Growing up I saw people walking around with numbers on their arms, and nobody would talk about it.

EW: In your book “We Only Know Men: The Rescue of Jews in France during the Holocaust,” you emphasize the rescuers more than the victims. Why?

PH: I’m interested in the perpetrators and the victims, but for some reason I’ve gravitated towards the rescuers. I find it terrible that everyone knows about Eichmann, Goebbels and Mengele, but nobody knows the names of those who risked their lives to hide and protect the Frank family. Are not the names of Victor Kugler and Jan Kleinman and Miep Giess and Elizabeth Van Vosquijl to be remembered when we think about the Holocaust? We all know about the perpetrators and the victims, but I want students to know that there were people who risked their lives to do the right thing."

EW: What were the character traits of those who risked their lives to protect Jewish people?

PH: Generally speaking, they were people who already had an altruistic personality. They were good to people and generous before the Holocaust, and they continued doing good things, but because of the situation, what they were doing wasn’t just the right thing to do, it was a matter of life or death. The rescuers considered themselves to be species persons. The great majority of them said it was a human instinct to help rather than a religious one.

EW: You’re coming out of retirement to teach at Richard Stockton College of New Jersey. Why?

PH: I figured what the hell. I’m 73. I got at least another good year in me (laughs). It’s important for us to know about genocide, because we’re living in the age of genocide. One reason I’m happy to teach in a department of genocide is to learn more about the Armenian, Rwandan and Bosnian genocides. I think it’s important for all of us to know about genocide – how it happens, from the initial identification of a targeted group, to a gradual dehumanization of that group, to the ultimate demise of that group.

EW: What’s it like when a Holocaust survivor addresses one of your classes?

PM: The greatest teachers of the Holocaust are the survivors. You could hear a pin drop in the classroom every time I brought a survivor to speak at Whitman. Their stories and their sense of mission to tell their stories captivated the imagination of my students. The pedagogical crisis in Holocaust teaching is found in the fact that, for the most part, they are no longer with us.

Patrick Henry is Cushing Eells Emeritus Professor of Philosophy and Literature at Whitman College. He has edited the forthcoming book “Jewish Resistance Against the Nazis.” It’s scheduled for release Spring 2014.