The 2013 Baccalaureate Ceremony was a spiritual event dedicated to the memory of Richard “Hish” O’Brien, who died in a skiing accident on Feb. 13, 2010. Though he spent little more than one semester at Whitman, O’Brien’s presence had an enduring impact on the Class of 2013.

In his opening remarks, President George Bridges introduced speaker Adam Kirtley, Stuart Coordinator of Religious and Spiritual Life, and thanked him for comforting students in the wake of O’Brien’s death.

“Adam’s compassion and kindness rippled through the student body in a palpable way, and he offered a calming presence and a listening ear, soothing the raw grief of both students and colleagues,” Bridges said.

Kirtley’s speech was titled “Defining Moments,” and it touched upon O’Brien’s reputation as a joyous person who lived in the moment. He said living a full life isn’t simply a matter of stringing together every opportunity to make yourself happy, though.

“The moments of our lives will be compromised if we seize them expecting that doing so will lead to inevitable bliss,” he said. “Being in the moment involves much, much more than that … The sublime and the tragic – living involves all of it.”

Jenna Fritz ’13 and Tate Head ’13 commemorated their classmate O’Brien in a speech titled “Live to Love.”

“With the milestone of graduation upon us and many new opportunities to come, I challenge everyone here today to live their lives with more passion, love, support and dedication than they ever thought was possible,” Head said. “As you walk forward from Whitman College and into the ‘real world,’ cherish every moment, every step and every breath – take nothing for granted.”

They said O’Brien, or “Hish” as he was known, lived life with “pure confidence and determination, no holding back.” 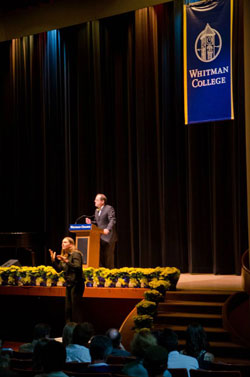 Fritz said, “I’ve been thinking of ‘Hish moments,’ of times in my life that I felt like I was living the way Richard lived. I thought a lot about Whitman. Richard was the one that got in early decision and was so excited to be going to Whitman. … I got to Whitman, and I saw that community. I saw how Richard brought people together and infused them with this energy for life. Instead of having one single Hish moment, Whitman is my Hish moment.”

Later in the ceremony, Bridges introduced retiring Registrar Ron Urban. Bridges said, “I don’t know if you realize just what a difficult job the registrar has, but I think it’s fair to compare it to air traffic control.”

The most remarkable shift in students over the years, Urban said, is the “ascendency of women.” Women now outnumber men on campus and “women also appear to be far less constrained these days from speaking up in class and are much more academically visible at Whitman, whether writing poetry, analyzing contemporary social phenomena or working with a faculty science mentor on publishable research,” he said.  “Moreover, women are demonstrating much greater self-confidence and poise in the classroom, athletic fields and in campus leadership positions.”

Remaining consistent throughout Urban’s tenure at Whitman, though: Students are “very decent and nice people.” Urban said his greatest privilege has been working with Whitman’s wonderful students.

Associate Professor of Biology Kendra Golden also spoke at the 2013 Baccalaureate. Golden likened the lens of a microscope to a liberal arts education.

“Though lenses do bring things into focus, it is up to the viewer to connect that image, the merest slice of existence, to the rest of the universe.”

Golden challenged students to continually find new ways of seeing things while respecting how others see things. They must find the right lens through which they’ll see the big picture of life, she said.

“In essence, what I’ve just described is what I believe to be the great splendor and strength of a liberal arts education, and why I feel so extremely fortunate to have taught here for the past 23 years,” she said. “In this environment, we are encouraged to think critically, to listen respectfully and to engage in vigorous discourse. This vibrant community reminds me of a gigantic Venn diagram. There are many constituents, and you can group them into sets and subsets, all looking through different lenses, all with different perspectives. And though we may end up agreeing to disagree, we overlap on a common mission in the search for meaning and purpose, posing problems and solutions, identifying conflicts and resolutions.”

“You lived, you loved, you laughed, you leaped, you landed; you lorded over mountains and rivers and tidal shores and wheat fields and sunrises and the hearts of loved ones. You set the course, you charted the waters, you navigated.”