In a normal year, the Banff Film Fest is a huge annual event, drawing over 1200 guests to Cordiner Hall to revel in the fun festive atmosphere that watching adventure films from all over the world creates! It inspires, entertains, and educates us. And  it brings the Whitman community and the Walla Walla community together in a unique and special way!
Friends, because of Covid precautions this year, we will not be showing an in-person Banff film screening in January.  We will continue to explore the possibility of a smaller scale in-person showing later in the Spring 2021, but that is totally unknown at this point.

The Banff Centre where the actual week-long film and book festival takes place every year in November, has been working hard to create the most options to watch this years films for a variety of venue options, both in person, and online this year.

We will be hosting the virtual option, which basically allows you access to stream the videos once they get released by Banff.  You will be given a virtual 'ticket' to watch an entire 'package' of films- much like our evening of a variety of films over the course of several hours!  You will be able to watch through the Whitman College affiliate link, and we will receive a small portion of the proceeds.  More on this as we figure out how that will work! 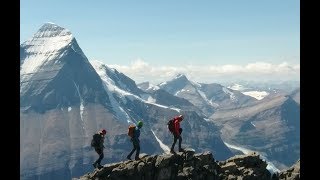 Whitman Faculty/Staff/Students with ID: FREE
Whitman Alums and Kids 14 and under: $5/each
Students of other institutions with ID: $10
General Public Adult tickets: $15

Find all the information you need to know under our First Aid Courses page.