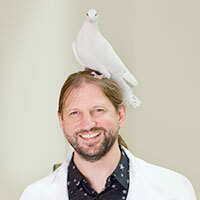 Wally Herbranson grew up in the icy plains of the Northern Midwest. After earning a B.A. in psychology and cognitive studies at Carleton College in Northfield, Minnesota, he immediately headed for the desert and earned master’s and Ph.D. degrees from the University of Utah in Salt Lake City.

Herbranson is a comparative psychologist, studying the behavior and cognitive abilities of animals in an evolutionary context. In addition to organizing a comparative cognition lab in Maxey Hall, Herbranson teaches several courses, including Psychology of Learning, Comparative and Evolutionary Psychology and Psychological Statistics. Walla Walla and Whitman College have proven to be wonderful settings for his intellectual and recreational pursuits. Outside of the classroom he enjoys sleeping, cooking, brewing beer and watching baseball.

Research in the Whitman Comparative Cognition Lab focuses on memory, perception and attention in pigeons (and sometimes humans). Professor Herbranson has worked with students on investigations of change blindness, response sequence learning, visual categorization and the Monty Hall dilemma.

When it comes to comparative psychology, Professor Herbranson says "as I see it, comparative psychology is really just a fancy term for acknowledging that the relevance of psychology goes well beyond the species homo sapiens. The key underlying assumption is that brains and minds are subject to the same principles of Darwinian evolution as other organs and physical features, and undergo the same kinds of gradual adaptations."

Most of Herbranson's research has been on pigeons and how their perceptual memory abilities compare to those of other animals. "This tells me some interesting things about pigeons, but more importantly, it also illuminates some general features of minds and brains outside of any species-specific context." says Herbranson.

More information about Herbranson's research can be found on his research website.

University of Utah Department of Psychology, Commendation for Excellence in Teaching, 1999

University of Utah Department of Psychology, Commendation for Excellence in Research, 1999