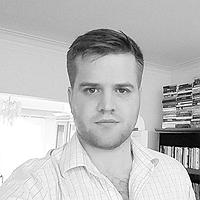 Professor McManus’ interest in politics was sparked at a young age when he was involved with Amnesty International and other human rights campaigns at his high school. He completed his Bachelors in Public Affairs and Policy Management at Carleton University in 2010, developing a more pronounced interest in theory alongside practical politics.  His L.L.M thesis at the National University of Ireland focused on the philosophical justifications of law.  After receiving a Chancellor Bennett Scholarship, Professor McManus moved to Toronto to complete his PhD in Socio-Legal Studies at York University. His work there focused on developing a theory of human dignity and rights, along with more down to earth empirical research on cyber bullying and the democratic participation of marginalized communities.

After graduating with his PhD in 2017 Professor McManus completed his post-doctoral research on the family law problems of low-income families, before completing a brief stint as an analyst with the Committee for International Justice and Accountability that same summer. He then spend two years as a Professor of Politics and International Relations at Tec de Monterrey in Mexico City, where he published four books and several journal articles. These include The Rise of Post-Modern Conservatism and Making Human Dignity Central to International Human Rights Law. His forthcoming work includes the monograph Liberalism and Liberal Rights: A Critical Legal Argument and serving as editor of the essay collection collection Liberalism and Socialism: Embittered Kin or Moral Enemies. In 2020 he joined the faculty of Politics at Whitman College.

Pol-101 A: Introduction to the Political Right Syllabus

There are two main prongs to my research. The first is defending a cosmopolitan conception of liberal socialism centered around the moral ideal of securing and amplifying human dignity for all. The second is analyzing the reactions to post-modern culture-from post-modern conservatism to new forms of identity politics. My theoretical interests include the political right, the critique of pot-modernity, and human rights theory.

McManus, Matthew. “The Post-Modernism of the Right and the Need for Constructive Thinking.” International Journal of Zizek Studies, Vol 12 (3), September 2018

McManus, Matthew and Jacobs, Lesley. “The Cost of Justice for Canadians and Consumer Problems in Everyday Life” Journal of Civil Litigation and Practice, December 2017, pp 148-155.

McManus, Matthew. “Review of Robert Brandom´s A Spirit of Trust: A Reading of the Phenomenology of Spirit.” Historical Materialism, June 2020

McManus, Matthew. “Review of Roberto Unger and Lee Smolin’s The Singular Universe and the Reality of Time.” Philosophies, Vol 3, July 2018