In the Physics department at Whitman College, we provide a curriculum focused on guiding students to understand the foundational principles of physics. From introductory level courses to advanced courses, students acquire a framework of ideas and techniques which prepare them to think creatively and forge their own paths in the scientific community. In addition to a traditional physics major, we offer students several combined major options that allow students to focus their studies on the interfaces between physics and geology, astronomy, mathematics, and environmental studies. In addition, the motivated student can also develop an independently planned major to pursue specific interdisciplinary interests.

The Physics and Combined Physics major programs are designed to be flexible. Students interested in majoring in physics are encouraged to enroll in the Introductory Physics course (Phys155) during their first semester. The major program then proceeds steadily with students only occasionally required to take more than one physics course each semester. However, we regularly have students who begin taking physics courses during their second year at Whitman. Because our major requirements include several elective options, students are able to use the menu of offered courses to complete the course requirements in six academic semesters. The flexibility of our major also enables interested students to spend a semester studying physics off campus and still complete the major requirements.

Laboratory work in physics is a catalyst to original learning. The department strives to offer truly integrated courses where there is no clear distinction between the classroom and the laboratory. Your laboratory experiences will illustrate experimental methods while they introduce you to important phenomena. They will challenge you to hone your experimental skills while encouraging you to appreciate the subtle interaction between theory and experiment. Our facilities are well-equipped and accessible, and provide a range of instrumentation from vacuum systems and lasers, to electromagnets, spectrometers and cryogenic apparatus. Our “Introductory Physics” laboratory features student workstations equipped with the latest of PASCO Scientific’s apparatus, all of which is interfaced to PC’S. These computers also have the ability to acquire and analyze motion captured on digital video. 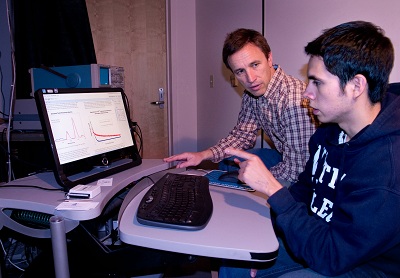 Faculty-student collaboration is highly valued in the Physics Department. We integrate research components into many of our laboratory courses to encourage students to be involved in conceiving, planning, implementing, and analyzing experiments to investigate a scientific question. In addition, student summer research positions are offered every year to engage students in the research specialties represented by our faculty. These projects often result in student presentations at regional or national meetings, and regularly result in publications in peer-reviewed journals. We also aid students seeking off campus summer research positions in government or university research labs, or internships with business and industrial firms.

We are in the process of beginning the Whitman College Society of Physics students chapter. We have elected officers and are beginning to plan events for the spring. The Physics Department has a high speed camera which was used as part of our first meeting.

About half of all Whitman’s physics majors pursue graduate programs immediately after earning their degree – approximately another quarter return to graduate studies within a few years of graduation. You may arrange a combined major with other fields such as astronomy, biology, chemistry or geology; choose a combined major in physics-mathematics; or participate in one of Whitman’s 3-2 Engineering Programs with Columbia University, the California Institute of Technology, Duke University, Washington University (St. Louis, Missouri), or the University of Washington.