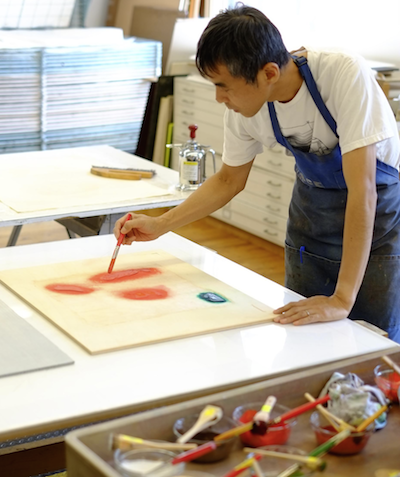 More detailed information for the 2019 Summer Advanced Mokuhanga Print Studio Program with artist and printmaker Ralph Kiggell can be found on this PDF file.  You can sign up for the workshop using this registration form.

The Whitman College Mokuhanga Center was established in March 2015 to provide studio spaces and a place for people to appreciate how traditional Japanese aesthetic ideas have enriched and inspired contemporary mokuhanga artists. The Mokuhanga Center shares a space that houses the Chikurakken tea room in the east wing of Whitman's Olin Hall and offers opportunities for Whitman College students and local and international artists to meet and gather with guest printers, artists, and carvers in workshops, studio programs, lectures, and exhibits. The Mokuhanga Center is directed by Professor Akira R. Takemoto who has been offering courses in traditional Japanese aesthetics at Whitman College since 1983. The Center's resident mokuhanga artist is Keiko Hara who taught at Whitman College from 1985 to 2006. She now serves as the Director of the Walla Walla Mokuhanga Project Space. Takemoto and Hara have been involved directly and indirectly in various exhibits, programs, and projects since 1988.

Whitman College provided studio space for 10 woodblock print artists to work on projects in the Olin East Tea Room wing in the summer of 2017. Participants include four Walla Walla artists, two artists from New York, and artists from Italy, Minnesota, San Diego, and Seattle. As they worked on their projects, they also watched and learned different Japanese woodblock print carving techniques from Shōichi Kitamura, a master woodblock print carver from Kyoto, Japan. In conjunction with this program, the Foundry Vineyards Gallery exhibited "Recent Works in Painting, Print, and Glass by Keiko Hara."

After the "Abstract American Mokuhanga [Woodblock Print]" Exhibit at Whitman College from February to April 2014, Keiko Hara and Akira R. Takemoto began developing plans to establish a Mokuhanga Center in Walla Walla.  With a strong endorsement from the International Mokuhanga Association (the Mokuhanga Innovative Laboratory) in Tokyo, Professors Hara and Takemoto met with local artists and teachers to explore ways to bring Mokuhanga and Japanese culture to Walla Walla in the spring of 2016.

In the spring of 2014, Professor Akira Takemoto (Japanese Studies) and Professor of Art Emerita, Keiko Hara curated an exhibit called "Abstract American Mokuhanga" in an attempt to explore the ways in which traditional Japanese woodblock print have influenced and inspired American abstract printmakers. Here is a link to this exhibit that was held in the Sheehan Gallery at Whitman College from February 19 to April 18, 2014.