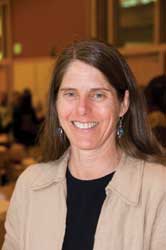 Lynn Sharp is Associate Professor of History in the field of modern Europe from the 1789 French Revolution to the 2002 formation of the European Union. Her courses cover France, Germany, Russia, and European Imperialism with a focus on social and cultural history.  Her research focuses on nineteenth-century France. She has sojourned in the esoteric worlds of reincarnation and spiritualism, publishing Secular Spirituality: Reincarnation and Spiritism in Nineteenth-Century France(Lanham, MD, 2006) and a variety of articles on the topic. Inspired by the rural, agricultural setting of Whitman College, and a fascination with relationships between the people and the land, her current work looks at the modernization of cheese production around the turn of the twentieth century. From dairy maids to the invention of Laughing Cow cheese, this research illuminates the ways new knowledge and technology transformed cheese-making from an "art" to a "science" and with it the ways peasants, cows, and cheese featured in French society.

In 2009, Professor Sharp received the Robert Y. Fluno Award for Distinguished Teaching in the Social Sciences at Whitman College.