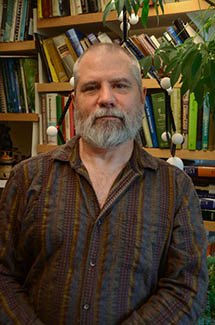 Professor Frank Dunnivant graduated with a B.S. in Environmental Health from Auburn University and a M.S. and Ph.D. in Environmental Engineering (Environmental Chemistry Option) from Clemson University. His graduate work involved the development of analytical techniques for the extraction of hydrophobic pollutants (PCBs) from sediments, the measurement of PCB desorption rates from sediments, Henry's law constants, sediment-water partition coefficients and modeling of the fate and transport of PCBs in a lake system.

Since graduate school Dunnivant has practiced what he calls a "form of nomadic science." First, he completed a post-doc appointment at the Oak Ridge National Laboratory (ORNL) with John McCarthy studying the fate and transport of PCBs and cadmium in soil/ground water systems. Next, he worked with Rene Schwarzenbach at the University of Zurich (ETH) and the Swiss Federal Institute for Water and Waste Water Pollution (EAWAG) investigating the abiotic transformation of nitrobenzenes in leachate from hazardous waste landfills.

His next "migration" was to the Idaho National Engineering and Environmental Laboratory (INEEL) where he worked on the Large-Scale Pumping and Infiltration Test. The purpose of this test was to determine the migration rates of radionuclides in the Snake River Plain subsurface and estimate if buried radioactive waste stored at DOE's Radioactive Waste Management Complex had migrated to the Snake River Plain Aquifer (a major, pristine source of water for Idaho farmers).

Dunnivant decided to return to his first love, teaching. He accepted a temporary teaching and research position at Clemson University. Soon after, he started a teaching position at Hartwick College in Upstate New York. After a three-year appointment there, Dunnivant accepted a position at Whitman College.

The many topics being explored and studied by Dunnivant's research group include the development of educational media (videos and software), the development of lecture and laboratory-based teaching methods, the development of analytical techniques for measuring trace-level pollutants in aquatic systems and the measurement of isotopic specific metals in Pacific northwest ecosystems.

Writing projects include the Environmental Chemistry and Instrumental Analysis Lab Manual, a Basic Introduction to Fate and Transport Modeling and Risk Assessment textbook (second edition due in 2018, again by John Wiley & Sons), two eTextbooks on inorganic and chemical analysis (that are updated every few years), his new book on Environmental Success Stories, a combination textbook and popular science book, and Pollutant Fate and Transport in Environmental Multimedia (John Wiley & Sons).