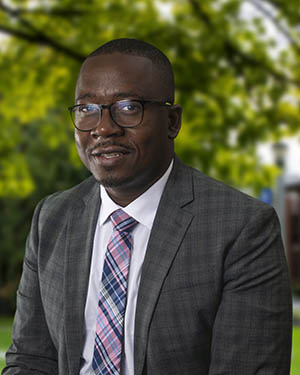 Bernard Forjwuor is a visiting assistant professor of Politics at Whitman College. Before joining Whitman College, he was a Burke, Hofman, Kolman Teaching Scholar at the University of Notre Dame. He was also Consortium for Faculty Diversity (CFD) Postdoctoral Fellow in Politics at Mount Holyoke College, where he taught courses in Black Political Thought, Politics of Decolonization, Imperial Neoliberalism, and Race Governance.

His current book project, Decolonizing the Politics and Discourse of Colonialism, interrogates ways the colonial and the racial, by folding acts of self-governance and self-determination into the mechanisms of their various undertakings, pre-determine liberal democratic outcomes. Hence, liberal democratic politics, as means through which autonomous postcolonial political processes affirm the terms of liberty, sovereignty, and independence, routinely functions to reinscribe the colonial it is constituted to negate. He reads sovereignty as a site where the colonial and the racial are transformed into democratic wills.