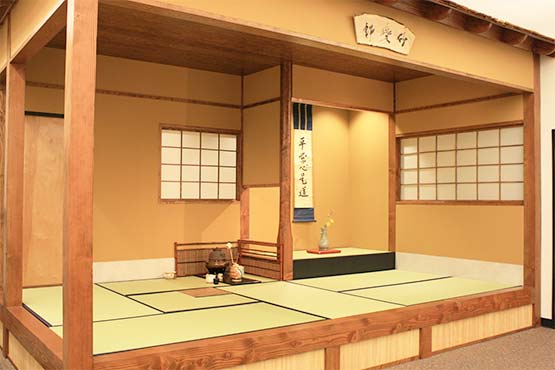 The east wing of Olin Hall is the home for Whitman College’s Japanese language classroom, which includes a special space for the practice and performance of the art of serving tea. The room was designed by Professor Akira Takemoto. 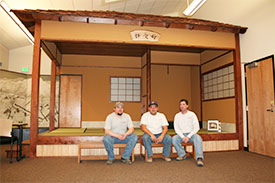 Master carpenter Larry Dimino and his assistants, Justin Partin and Luis Cuellar in front of the Chikurakken.

The tea space includes a six and a half tatami mat area to prepare and serve tea to guests and a formal three-quarter tatami mat tokonoma (alcove) space for the display of scrolls and flowers. Working closely with architect James Stenkamp, Professor Takemoto made sure that the tea room would be covered with a cedar shingled roof and would include a preparation and storage area called a mizuya.

James Stenkamp and his wife Susie spent long hours designing and creating a pathway that would complement the aesthetic ideas of the new space. Susie Stenkamp, in particular, served as a consultant on the plants and flowers that would be included in this pivotal area. And it was Larry Dimino and his assistants who translated the drawings by James Stenkamp and prepared and put together the materials that grew into this tea room.

Professor Takemoto received a generous gift from Jim and Jane Robison which allowed him to purchase and ship the tatami mats from Kyoto, Japan. Paintings by Neil Meitzler, Ikune Sawada, and Keiko Hara grace the walls of the student lounge and hallways of the Asian Studies Center. In the tokonoma or alcove space of the tea room is a scroll by Master Calligrapher, Fujii Yoshiyasu, and several screens from the Whitman College Davis Collection Asian fill the display cases in the tea room / classroom. 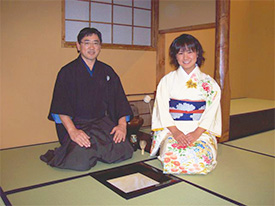 The Whitman College tea room reflects the aesthetic concerns of the Yabunouchi style of serving tea that began with Yabunouchi Kenchū (1536-1627). Kenchū and subsequent grand masters of the Yabunouchi family sought to bridge two important aesthetics ideas in Japan: simplicity and elegance. The Yabunouchi style of tea seeks to combine the simplicity and frugality of what people often call “wabi-tea gatherings” with the elegance, strength, and versatility that hallmarks the “shoin style tea gatherings” of military aristocrats. In fact, nothing more aptly blends these aesthetic sensibilities than the grand Shūkido tea room located on the grounds of the Yabunouchi family residence. This is the room that inspired Professor Takemoto’s tea room design. It is also the room where Professor Takemoto began his training in 1976. It is where he returns every summer to continue his practice, and it is the room where he received his certificate to teach the Yabunouchi tradition from the current and thirteenth generation Grand Master, Yabunouchi Jochi.